Newlyweds Mr and Irene Maclean (née Johnson) moved to their Raumati South farm just after June 1926. Mr Maclean was told by a doctor to leave farming in 1939 due to ill health. So they moved to a smaller property in Levin and here at Jean Dobson’s (née Maclean) home I met her brother Callum and sister Margaret.

It was such a close knit community then that Mum remembers seeing a man painting the church there when someone said, “Here is Irene Johnson from Waikanae”, and he said “Thank goodness not another Howell or Maclean!” She hadn’t the heart to tell him she had just married into the Maclean family.

From the beginning we had a very old beach cottage in Rosetta Road. The walls of it were so covered in nails that friends spent a day taking them out before we could ever stay there. Later, just before leaving in 1939, Dad had the newer cottage built so although we moved to Levin, that was still our beach house until sold in 1990. We had a windmill there to get water for the stock, there were plenty of windmills around at the time.

In those days there were so many fish that there was never a problem with sharks, they were never hungry enough to come in so close to shore. The men (the Hans and Clunies as well) used to go fishing to Fishermans Island. Chum Howell had a bach over there and if the weather got too rough to return they would light a beacon fire to say they were staying the night. The Howells also had an important signal fire set half way up the hill above and south of where McDonalds is now at Hillside Farm. Next door at the beach were the Newburys, Rushes and Bristows. They had a boat ramp out to sea and we children would launch a little boat.

We rode our Dad’s milk cart to school. Dad had bought us a horse, Betty, but she died before we were old enough to go to school. The route we took was down Raumati Road to Paraparaumu School. Dad had a wonderful smokehouse and Callum used to always hang out there. We remember once the school bus going around the “top beach” – Paraparaumu Beach was called that because it was snobby. There was also an area at the north end of top beach with lots of very fancy big homes, called The New Jerusalem, after the large Wellington-based Jewish community building out there.

Building Rosetta Road caused a lot of controversy at the time. The idea was that the farm owners would contribute half the land and the home owners the other half, but they didn’t agree so the farmers gave all the land. So we did too. Dad had sold land to the south to Mr Eatwell as he would give it to the Hutt County Council and it would be looked after, but it wasn’t on their books.

When the time came to build Rosetta Road, he approached Mum and Dad for land down our property for an access way to the beach. Dad gifted it as a public access and it’s the only time we ever saw Mum mad in all our lives. The track is just where it used to be although it’s been widened a little at the top. The worst thing they ever did with that right of way was put the stormwater drain down it, as it washed all the sand out to sea. The Macleans were in general satisfied with the outcome reached in council over the right of way (recently renamed “Berts Way” after much campaigning by Joan Sherley).

Our farmhouse was in Miro Road, although there were no roads, just a track. We had a funny man as our neighbour on the south who we would only see to buy milk, cream and eggs off us, except that when he came he never said hello, he just recited Robbie Burns poetry. He must have been Mr D. Hyde.

On the north side we had the Metzentines’ farm. One day we girls had to mind toddler Callum while our mother made an urgent visit to be with a dying member of that family. Baby Callum disappeared and we saw, in horror, that he was toddling halfway across the two bull paddocks, following Mum. Well we were scared of the bulls, so we stayed and watched, he climbed the fence and made it across. We thought we’d be in for a hell of a telling off, but Mum was OK because he said he had wanted to see the angels take Mr Metzentinen away.

Our boundaries were about Hydes cutting to the south and we sold those house sites between there and Café Rosetta during the Depression to Harry Shaw’s farm, Matai Road, in the east. Mr Fitchen was a little along the way and was marvellous at fixing everything. He even had a flying fox at his place.

In those days before the townies came out things were very different because we had no refrigeration. When we slaughtered a beast from the farm the meat was shared around everybody, so everybody took turns at the slaughter. Also when a farmer found a use for a piece of driftwood they would carve their initials in it and no one else would take it. Of course the townies couldn’t understand such things.

We used to picnic as a family up in the Howell farms up Valley Road, and Sonny Howell’s recent family reunion was such a wonderful event for us. The Paraparaumu Public library has a copy of the Maclean family history written by Jean Dobson which elaborates on all these memories. Our families also farmed Kapiti Island, which was a wonderful place to visit in our childhoods.

The Maclean farm in Raumati South was purchased by Bill Eatwell and his family. They enjoyed many years farming there before moving to Palmerston North. Bill Eatwell’s family home was on the hill to the eastside of Matthews Park. 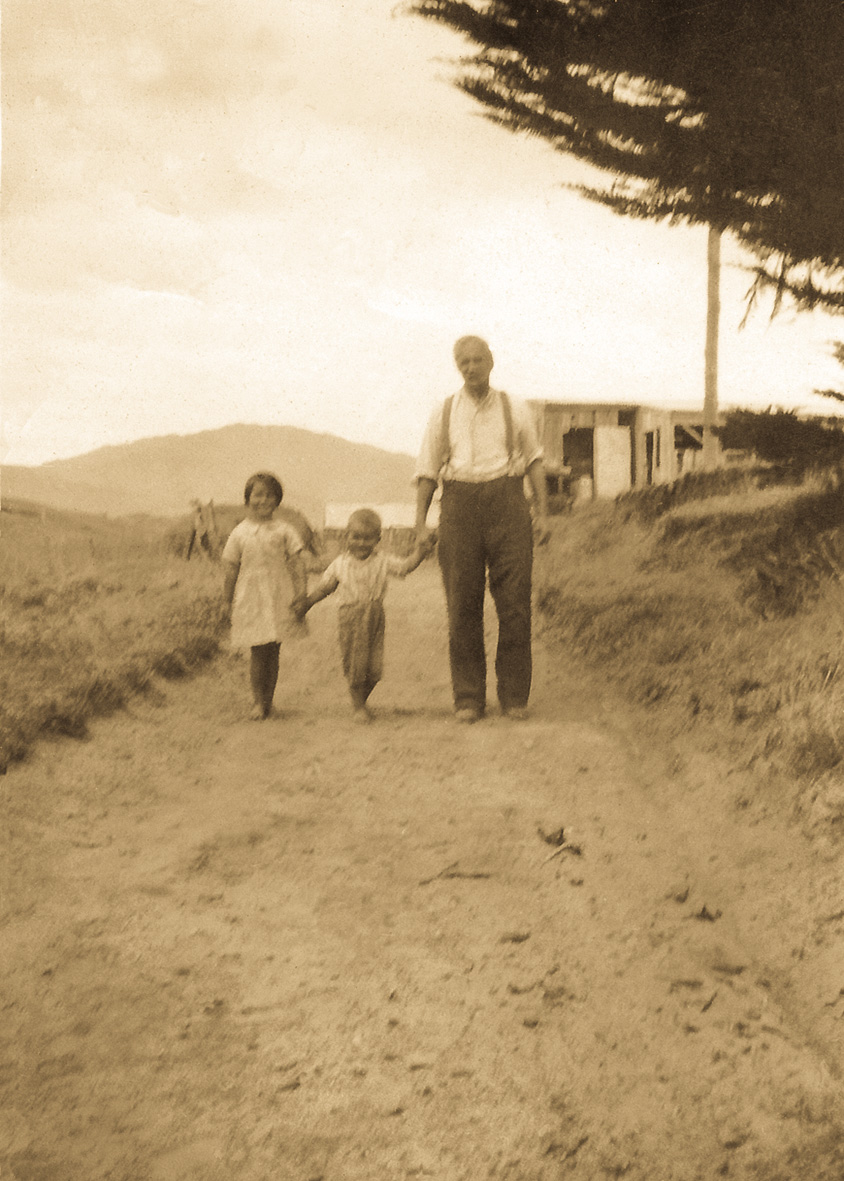 Dad, Callum and Margaret walking down the track that is now Miro Road. To the left is the garage and smokehouse. Unseen to the right is the homestead. Contributed by Jean Dobson. 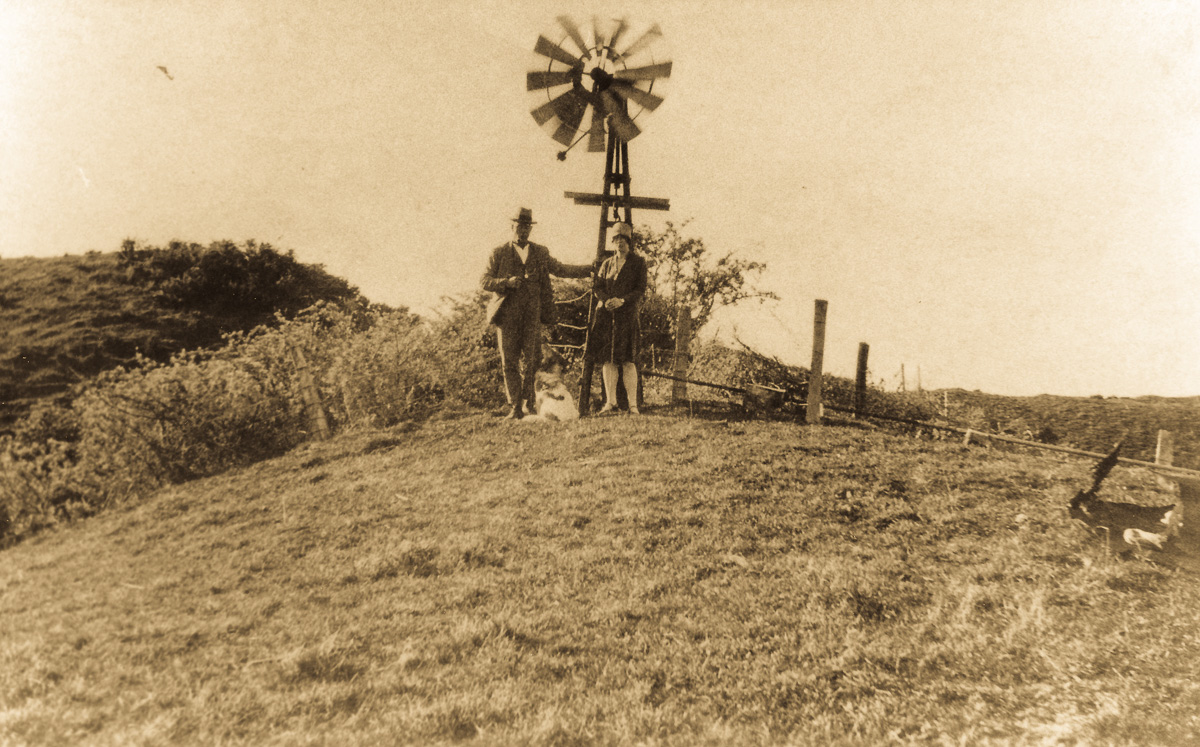 The windmill on the beach front of the Rosetta Road beach house. There were many windmills around Raumati South at the time to raise water for the stock. Contributed by Jean Dobson. 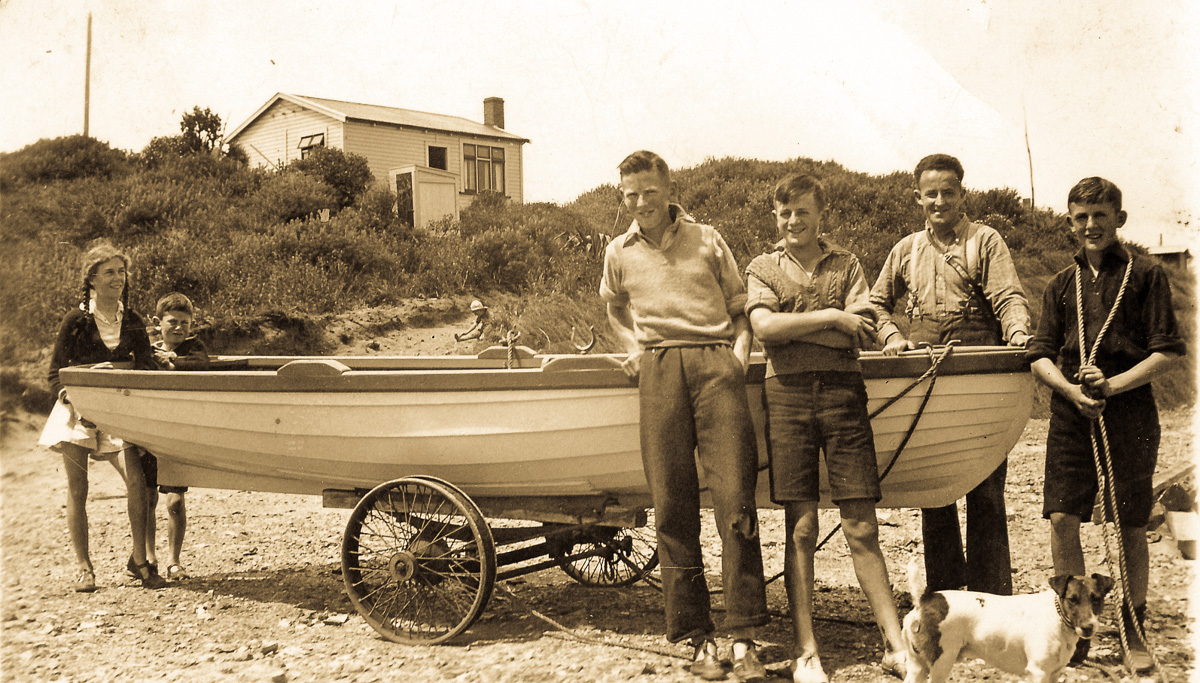 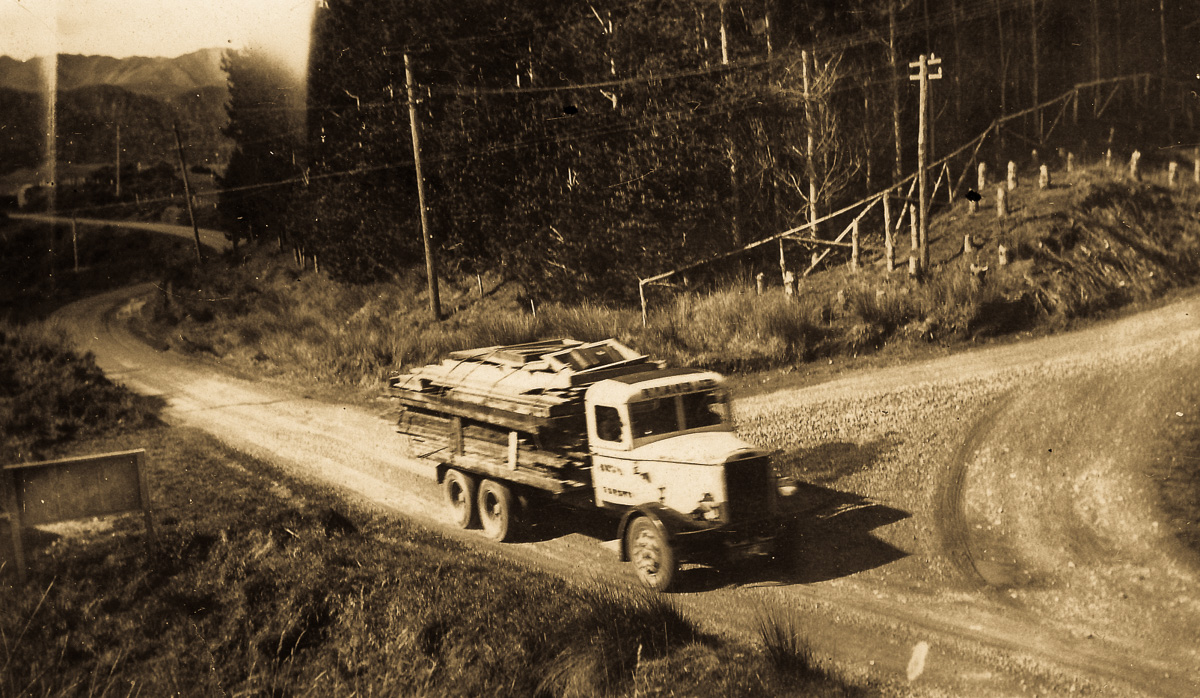 First load of timber for the hill cottage at Raumati. The frames were precut and brought up over the Paekakariki Hill by Ryans Transport. Jim finished off this building. Contributed by Jean Dobson. 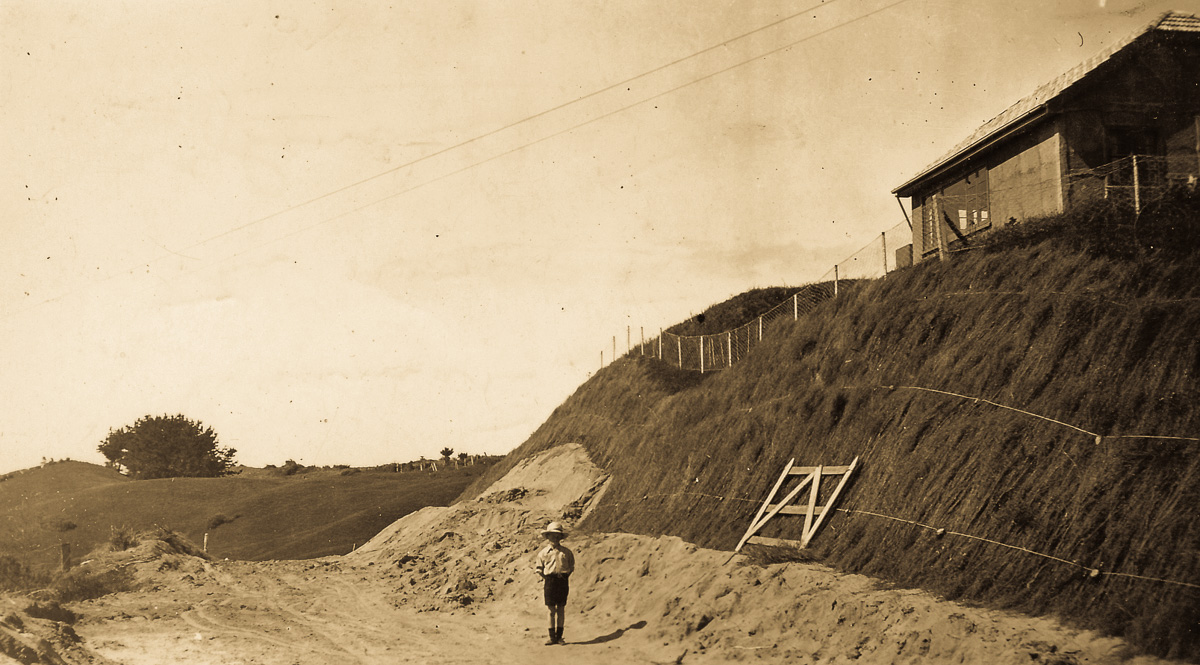 Putting Glen Road in just under the hill cottage. Pop Dobson named Glen Road for the town of Glenvale, Toowoomba, Queensland, where he came from. Then it only went to Tiromoana Road. Contributed by Jean Dobson. 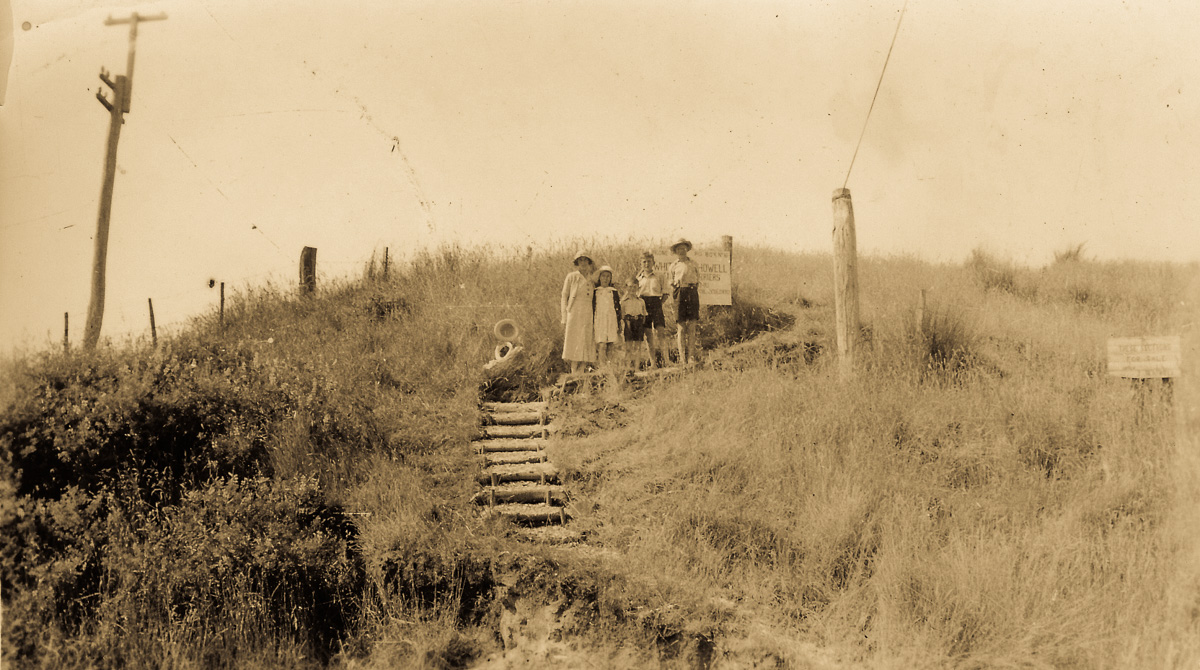 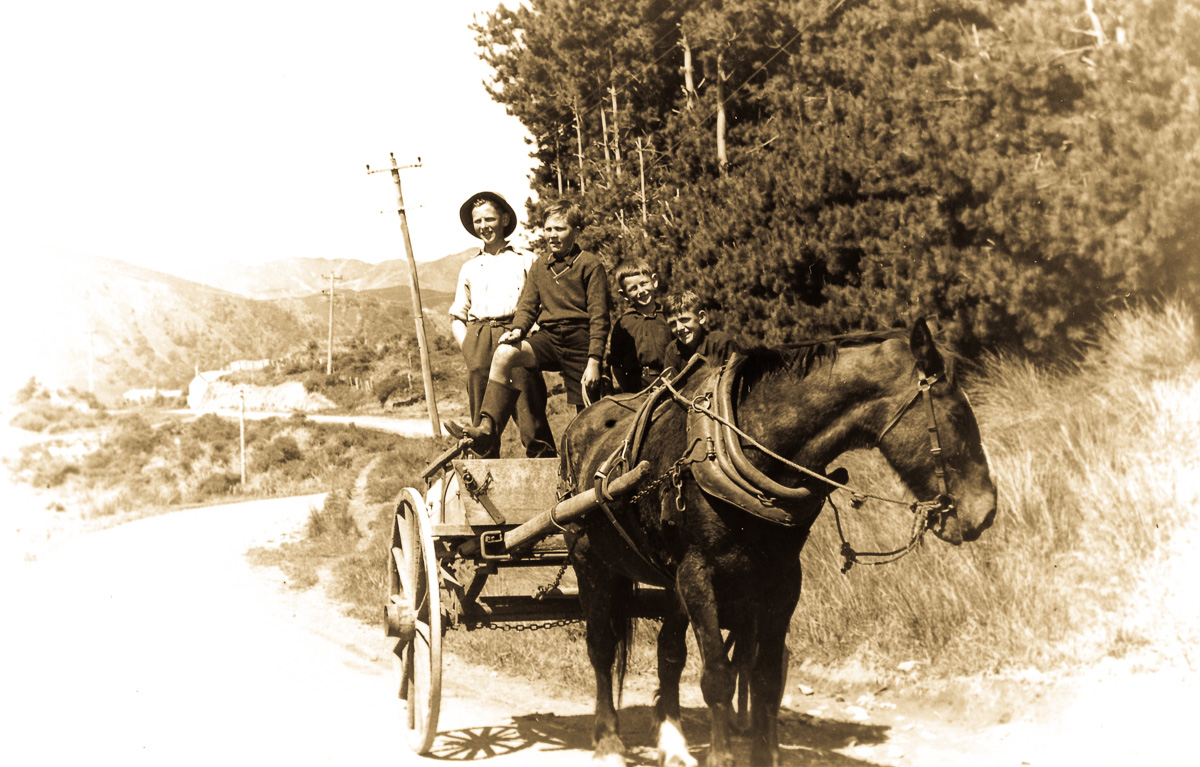