The Life Story of a Family Bach

For several years in the 1930s our family from Miramar holidayed on the Kapiti Coast in rented accommodation, before purchasing a bach of our own in 1941, at Raumati Beach.

The summer of 1937–38 saw us at Raumati South in a rented bach on the beach front. It probably was where numbers 25–27 Rosetta Road are today, but back then Rosetta Road did not exist and entry was a long walk through from Renown Road passing another small bach – which we rented three years later. The ‘front’ was close to the beach and had a lovely verandah with opening glass windows. Among the piles of books and games was a wind-up gramophone on which we played “Red Sails in the Sunset” endlessly. Maybe there were more records then, but I don’t recall any of the others. We amused ourselves on the beach all day – swimming and building ever bigger sandcastles. Was it really calm and sunny all day every day in those far off times?

The ‘Back bach’ was not so flash and it was a longer walk for a swim. We owned a car by this time, a black Austin Six, and the journey from Wellington was now so much easier with the new coastal highway, opened in time for the Centennial Exhibition in 1940. Prior to that, car journeys were round Pauatahanui Inlet and over the tortuous Paekakariki Hill Road. We always stopped to look at that view whether we travelled by taxi or were being transported by a family friend.

After purchasing our very own bach in 1941 annual holidays were spent at it, off Wharemauku Road. It stood small and square on a large hillside section, very sheltered and private with its own beach access. Family anecdote has it that we were picnicking on the beach and wanted water to boil the billy. Father walked up a nearby track and it seemed to take forever before he reappeared and announced that yes, he had some water – and he had also bought a bach! It was fully furnished with all crockery and cutlery and cost 425 pounds ($850). My sister and I still own it and today that amount is not much more than our quarterly rates bill.

I recall many great times there. One exciting stormy night I particularly remember. There must have been an onshore wind coinciding with a high tide and we heard crashing noises outside all night. Next morning – to our total amazement – we discovered that half a nearby beachfront tennis court had disappeared into the raging sea. We still swam and played on the beach, but we also had our bikes with us and explored further afield. My brother and I once rode our bikes from Miramar. (Imagine allowing kids to do that today with the huge increases in traffic!) We played a lot of tennis at Raumati South and Raumati Beach courts and sometimes drew a court outline on the beach at low tide. Boys had become a part of our social lives, and they camped at Kena Kena Motor Camp or Hydes Motor Camp on Seaview Road. We lit fires on the beach and cooked sausages on peeled sticks and had a thermette for the ‘olds’ to have a cuppa. We sat on wooden benches at the local ‘flea-pit’ to watch old movies. The land on the eastern side of Matatua Road was all farm land and we raided apple and plum trees on the way to the Raumati ‘everything’ store. To the north Paraparaumu Beach had two stores, one on each corner.

During the War, when petrol was in short supply, our father used to take the train from Wellington to Paekakariki and walk up the beach to check on the bach, mow the lawn and return the same way. It was a very long day for him – usually a Sunday, when we had to go to Sunday School or Bible Class and church. Soon school and Bible Class dances became more important than a weekend at the bach. Father was fed up, he decided to sell the place. It so happened that after all the arrangements were made the prospective buyer’s loan was refused, and the decision was reversed. How fortunate, we now think.

The bach is there today, small and square still, with large flash two-storey houses on neighbouring sections. Many improvements have been made over the 65 years of our ownership. Town water and sewerage have replaced the water tank and long drop. Users can now have a shower in the added on bathroom instead of a washbowl of water outside. Dishes are done in a proper sink with hot water on tap rather than in a bowl. Many a time there was a howl of anguish as a spoon was inadvertently thrown with the washing-up water into the blackberry patch next door. Originally our bach had wooden garage doors – you didn’t need a permit to build a garage in depression days. These have long since been replaced with glass doors. There is now a fridge where there used to be a tin safe hanging in a tree and the bottles of milk were carefully lowered into a piece of pipe set longitudinally in the ground. There is now carpet instead of lino, and there is even a washing machine, although with cold wash only. But some things remain – bunks in the kids’ room and the odd piece of furniture from the original purchase. The flat roof, which started to leak, has been covered with a hip roof.

Users are now third and fourth generation since the 1941 decision to buy rather than rent. Are we sitting on a gold mine? Many would say ‘yes’. However, as the owners, we are there for the sentimental value of our old family bach. 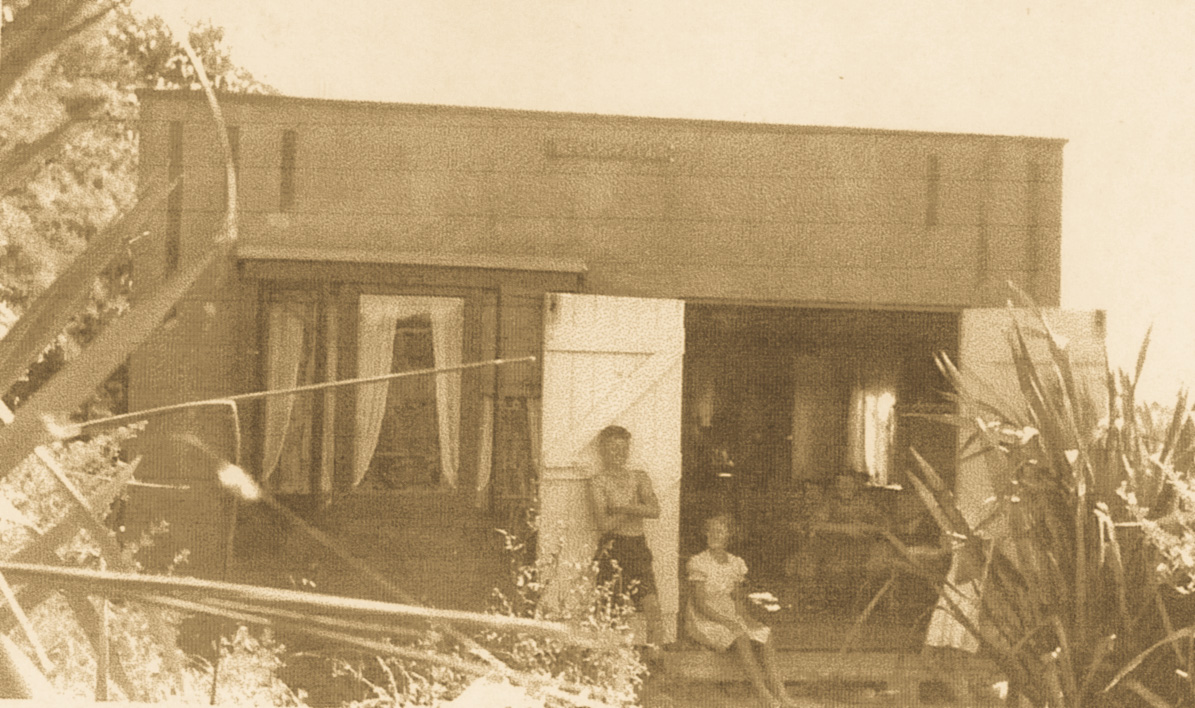 The Bach Wharemauku Road 1941 (showing person standing in front of a door). 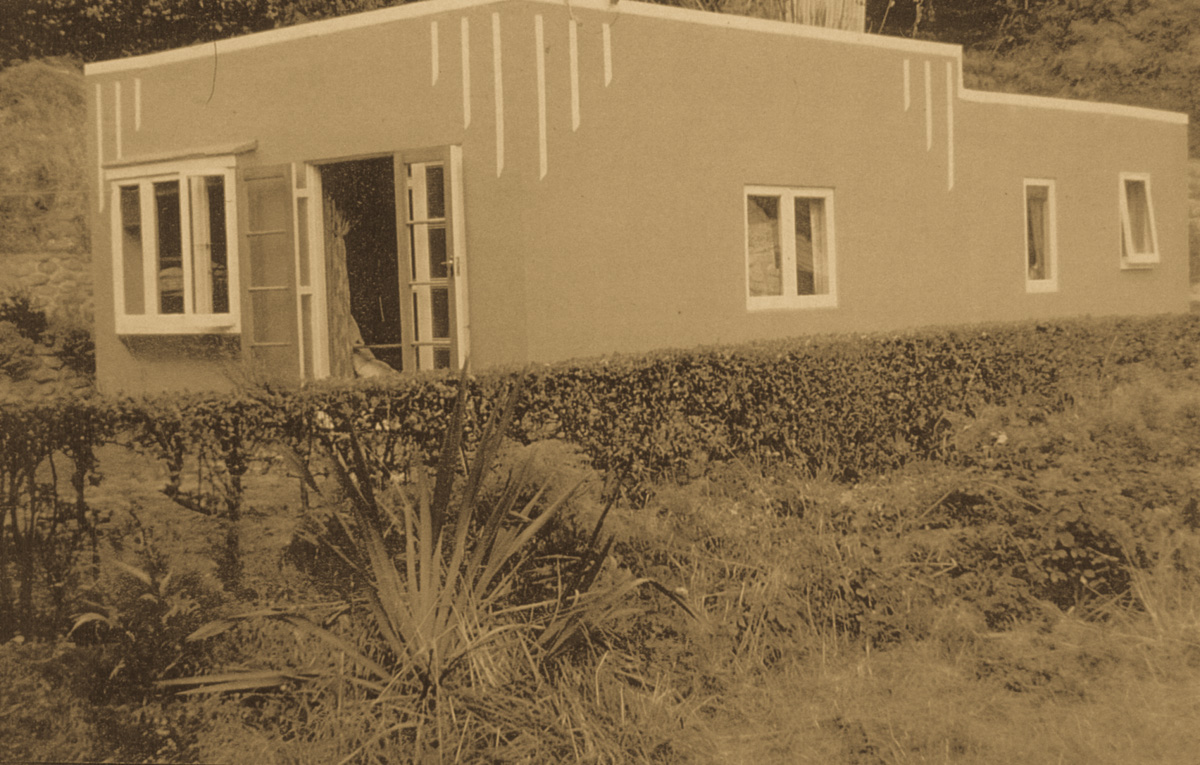 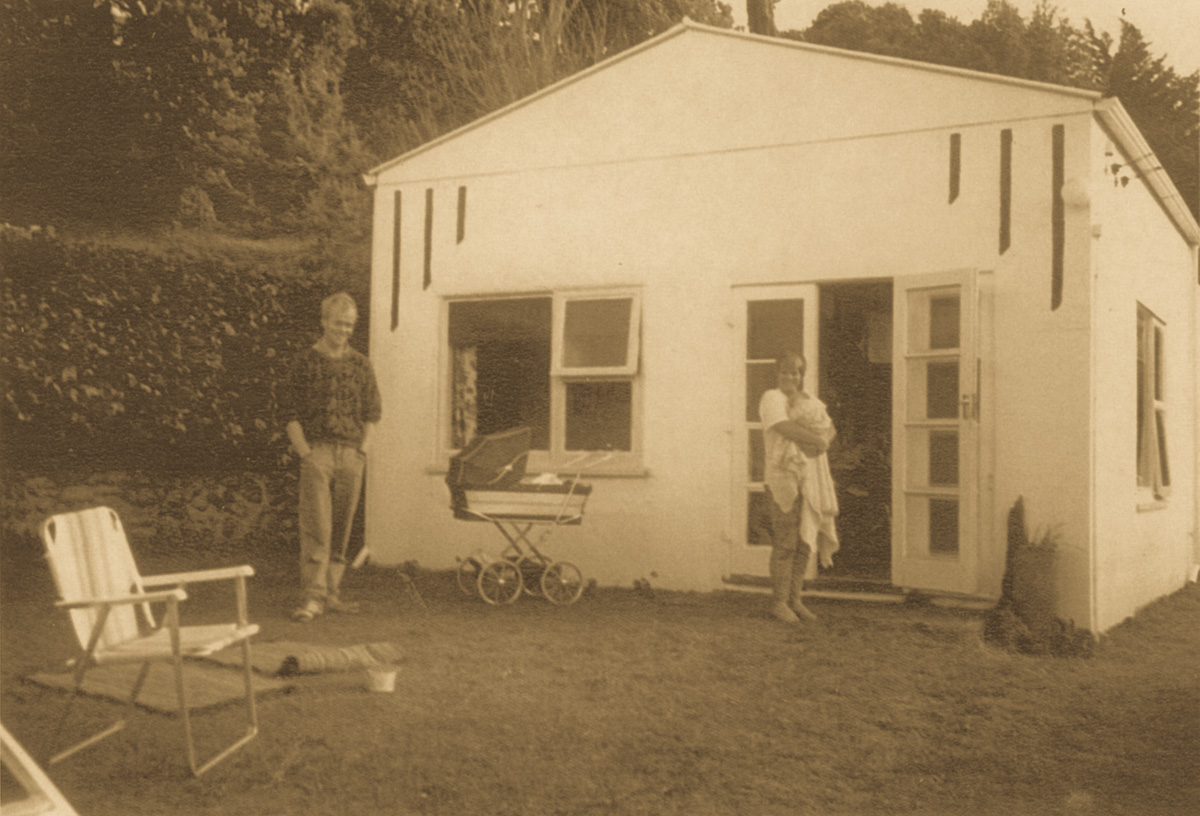 Our bach after glass doors installed.