In no time at all the estate was almost built out with the accompanying population explosion. The Plunket Nurse called it Nappy Valley, in fact there were nine boys born before a girl arrived. No one had cars in those days, except for Mr Hyder who drove around slowly in his silver Jaguar, always with a pink carnation in his buttonhole. So we all walked to the village for our groceries.

After a few months I got to thinking about the lack of facilities for children as the only kindergarten was at Raumati Beach. When Kneale Mark delivered my groceries one day I asked him what the chances were of starting a kindergarten, as I knew he was on the Progressive Association. He came back to me and said they were quite happy about it. We called a public meeting and formed a committee to start fundraising.

We opened in July 1962 in the supper room of the Raumati South Memorial Hall., but the roll increased so fast we were soon using the main hall. We became an Incorporated Society, and Jean Whitehead and myself attended the inaugural meeting in Nelson of the National Association of Child Care Centres started by Sonya Davies. The kindergarten moved to its own premises in Tiromoana Road and still exists today. It always had a good reputation, and the Association used to send people who were thinking of starting a kindy out to observe ours.

A few years after moving to Sydney Crescent I realised there were 75 children living in that area surrounded on two sides by very busy roads, so I wrote to the County Town Committee and said we needed a park for the children. After several consultations, they used land that had been put into a road reserve for the still non-existent Link Road, and made a park at the corner of Sydney and Leinster.

By this time I was a member of the Progressive Association and I also had my mother-in-law come to live with us from Nelson. She had several strokes and was fairly disabled and unable to get out much, so once again I approached the association and asked what the chances were of starting a Senior Citizens’ Association. They said “Go for it”, so a man called Alf Young and myself called a meeting and formed a committee. We started it in the Memorial Hall on one Friday a month. The ladies of the Kindergarten Committee would drive around (those who had cars) and pick people up from rest homes and Marire. The folk used to bring two pieces of food on a plate, and the Kindy ladies made a shared afternoon tea, did the dishes and took them home again. Once they were on their own feet they did all their own arranging and eventually built their own building in Bluegum Road in Paraparaumu Beach.

The Kapiti Registered Nurse Association was also started in Raumati South. The Rainbow Holiday Camp was where Rainbow Court now is and the proprietors were Mary Moore and her husband. She was also a trained nurse, so the hall at the camp was used for our meetings for years until they moved to the Red Cross Rooms in Matai Road.

Harry Shaw was the farmer who owned all the land between Leinster Avenue and Matai Road, and when we moved here the children wanted to play on the farm so I sent them over to ask him if they could. He was a very good psychologist and he said they could play on the farm as long as they watched out for any children who were chasing the sheep. If they saw any they were to tell him, also if they saw any sheep in trouble they were to get him. Consequently he had very well protected sheep, and the children were quite proud of that responsibility. The farm was a good place for blackberry picking, and also across the railway lines at the bottom of Poplar Avenue. The hills above the railway line were also a good place to climb – there was a natural spring that flowed out of the hill, and they used to catch crawlies.

Before the Raumati South School opened the children were bused to Raumati Beach. The bus stop was over the road on Poplar Avenue, which was a very busy road, so there was quite a lot of controversy about schedules and timetables before the bus company relented and rerouted buses through Leinster Avenue and moved the bus stop. St Mark’s Scouts were held in a big garage at St Mark’s Church, Raumati Beach when I took over as cub leader.

With the committee we eventually persuaded the County Town Committee to allow us some land in Matthews Park and with a lot of parent help we built our den. I left in 1970 to produce No 5 child, and the scout den was eventually moved to Tiromoana Road opposite the kindergarten. 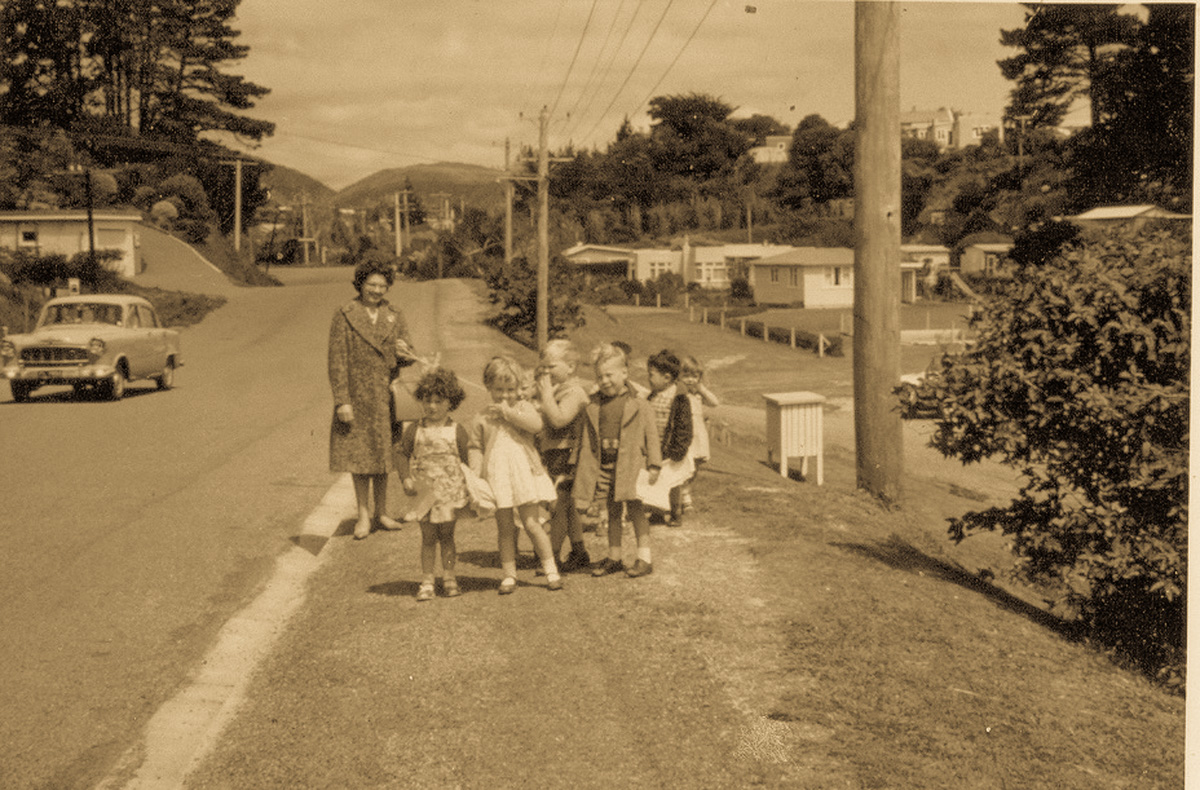 Outside the kindy showing the famous ‘Kindergarten Bump’ Julie Parkinson, children Lynette Morgan, Pauline Phillips, Craig Benseman, Brett Parkinson.
NOTE: This bump in Tenniscourt Road was famous for destroying the axles and suspension systems of many many vehicles, as any vehicle driven over it at speed would get airborne, consequently all the teens who bought a new car would take it for a gut-wrenching try out. The locals must have dreaded Friday and Saturday nights during the 70s and 80s, when Raumati South was a destination just for the thrill. 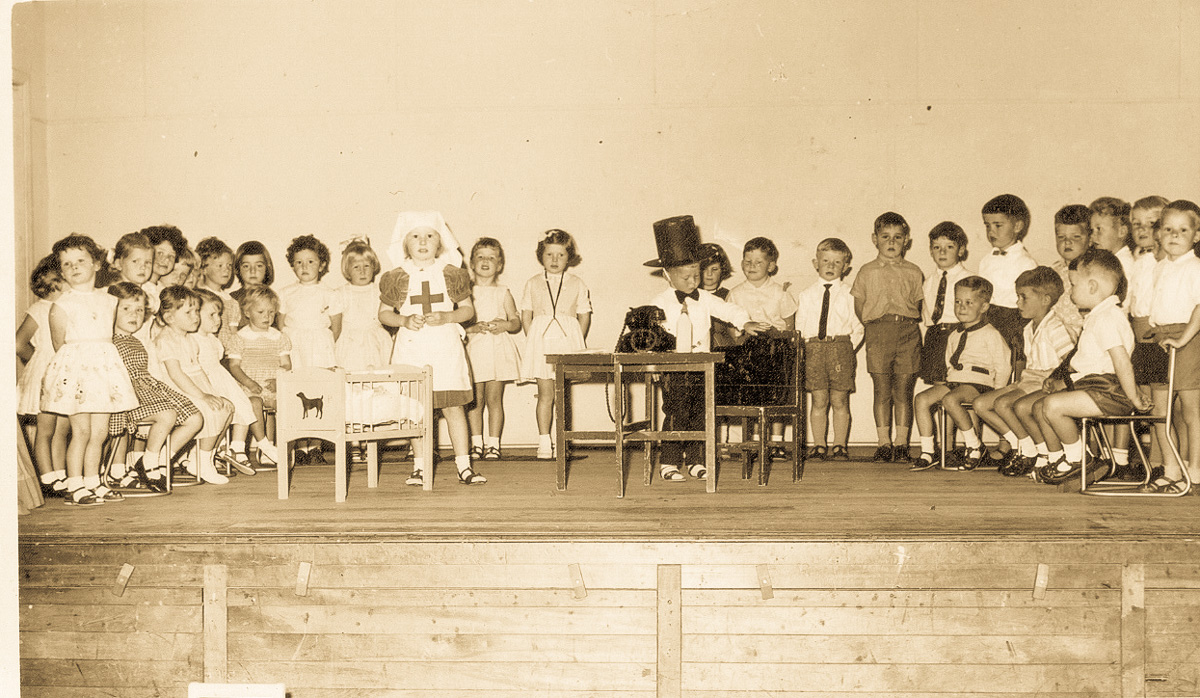 Nurse and Doctor Scene in a play by the children in 1964. Contributed by Julie Parkinson. 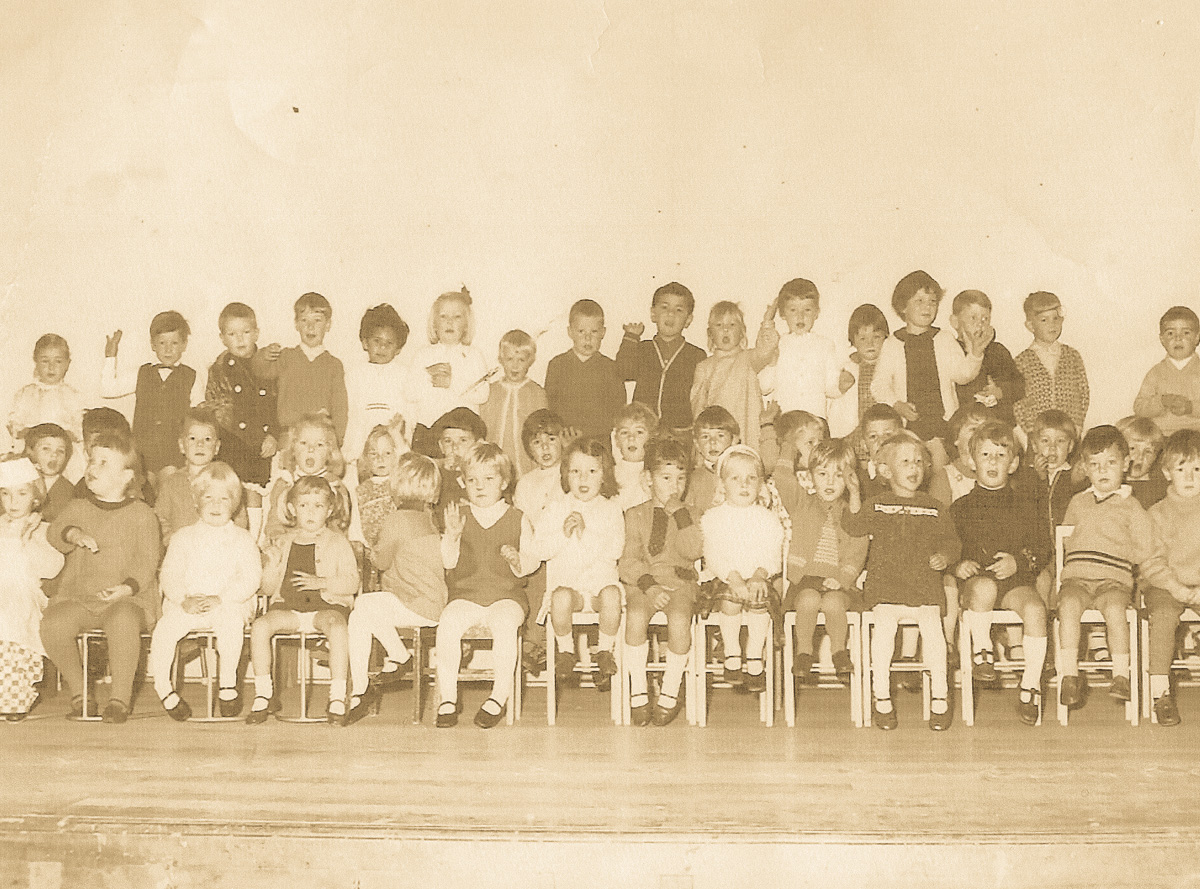 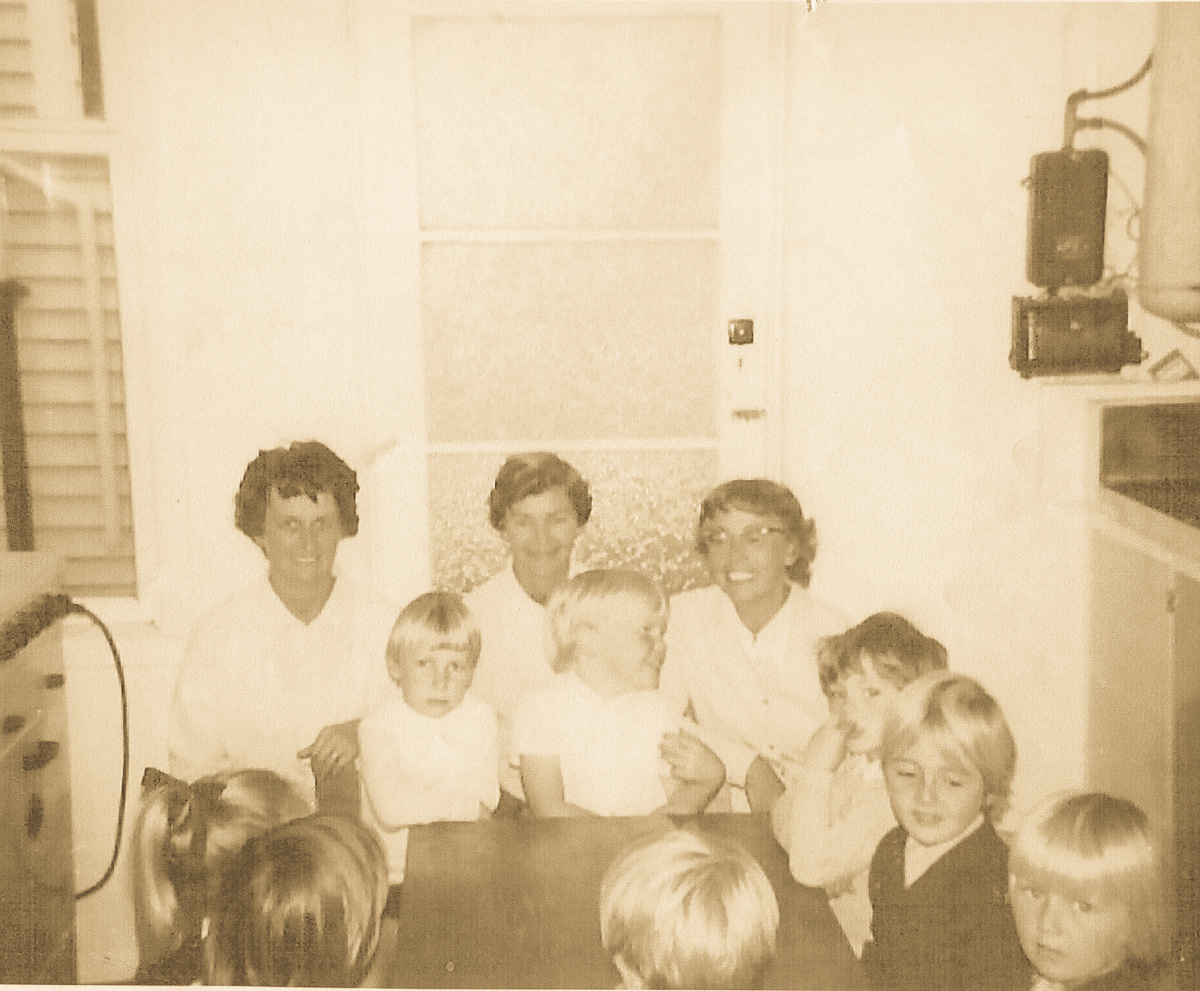 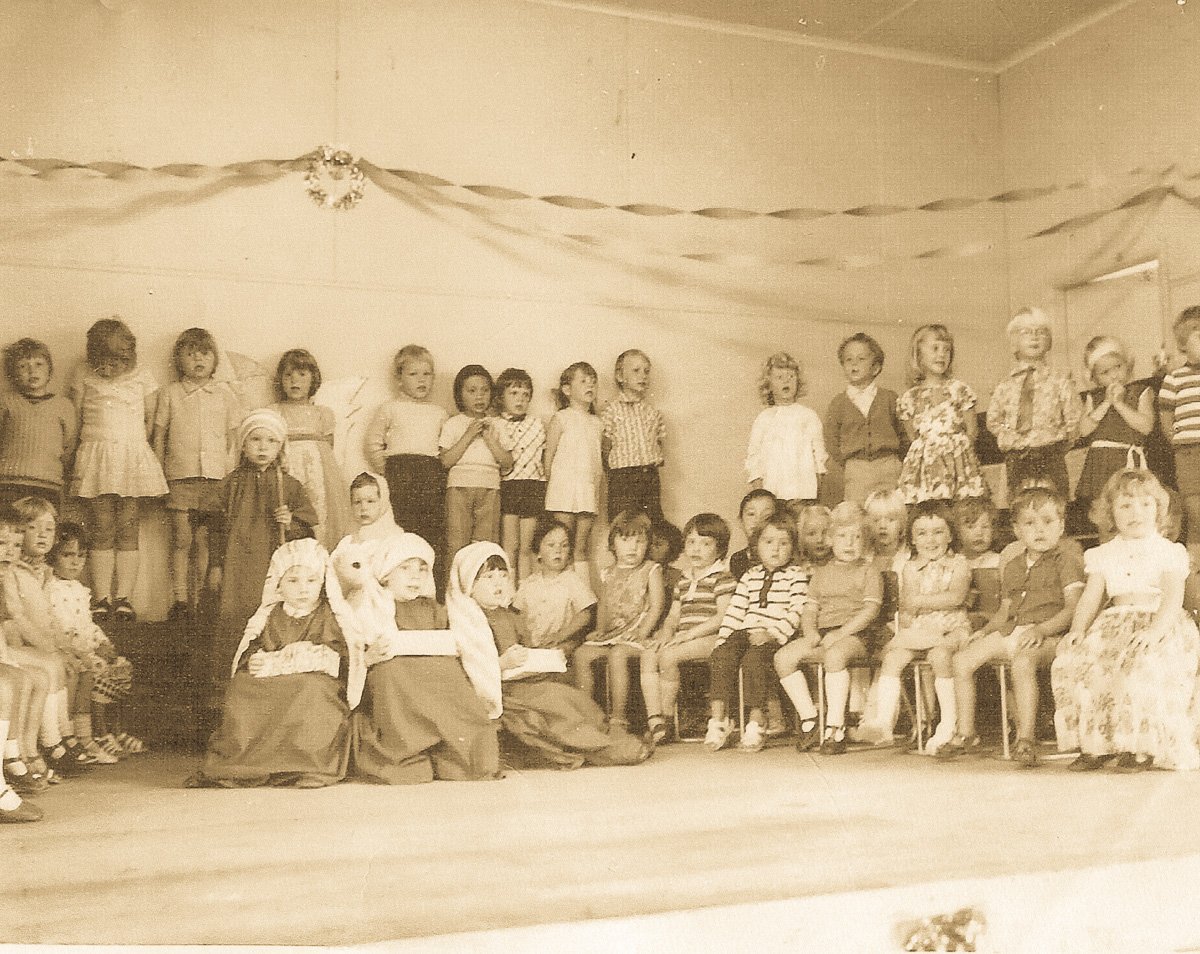 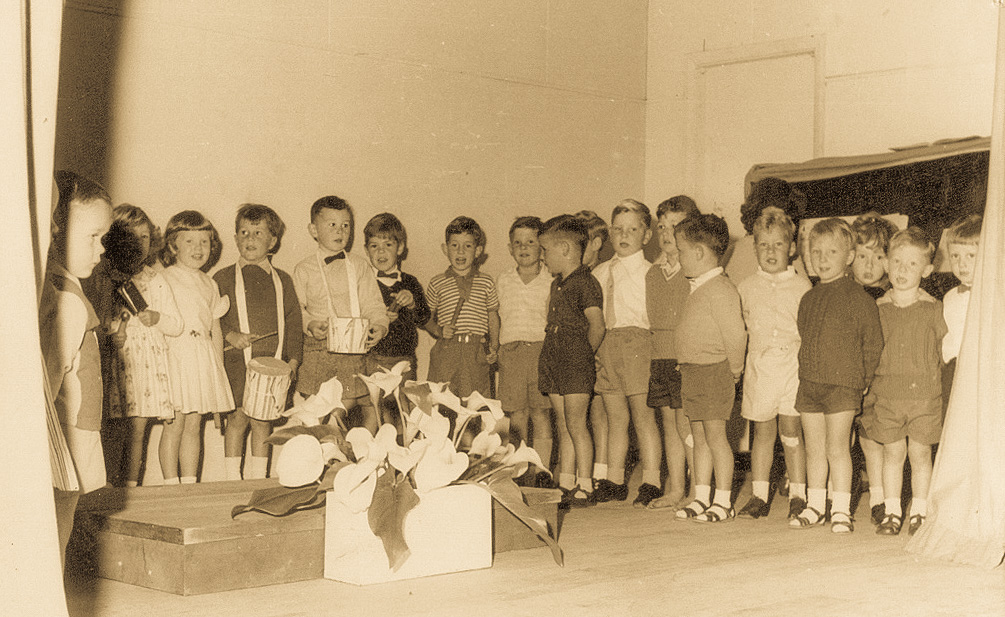 ← Our Olympic Heroes All Our Schools →