The Modern Child’s Guide to the Art of Play

I grew up on The Esplanade from 1957 to 1969, so had all my schooling years here. Dad built Number 79 on a shoestring and we were one of the few permanent residents down there in those days.

We had come out from Guernsey, so were used to living near the sea and my Dad was a keen fisherman. We had a 6ft dinghy. My brother and I would row out and anchor off Jeep Road to dive off and then surf back in on the waves, often ending up broadsiding and capsizing. Dad would surf cast or get his solitude fishing out in the boat late at night, usually scoring a large schnapper or kahawai, until an orca rose out of the water one night and slapped its tail down beside him. He rowed at unforeseen speed and never fished at night again! The extent of the fishing madness was shown when Mum and Dad caught a barracuda in a towel in the surf one summer. Our dinghy was finally wrecked by one of Raumati’s famous spring tides.

I hung out with the Rainey and Flynn kids at the weekends and we would make the most amazing forts with lashed flax poles in the sand dunes or in the many empty sections up and down The Esplanade, Jeep and Forest Roads. It was a different world then and our mothers would often not see us from dawn to dusk. We would climb onto the logs washed up on the wild seas to see who could stay on the longest, and the Flynns had a tin slide from their bank that went down to the sea. They had older siblings who used to experiment on us, so we have some pretty mean photos of us all dressed up in drag with pancake makeup, beehive hairdoes and posing with unlit cigarettes. I even tried out being a Catholic and going to Mass with them for a while, but eventually settled at Sunday School with Wendy Moller in the little church by the shops. We frequented the Catholic camp a lot though. It had a ring of huts around the high perimeter, where Rainbow Court is now, and a deep grassy basin in the centre with a camp store.

It was a buzzing place in summer and we played that fainting game on the grass with our friends. When the camp closed years later in the sixties I grazed my pony there, near where Gredig’s house is now. I used to hang out there with Jo Rainey and the Flynn twins. Their family had seven kids and they had a giant tin slide from the house down to the sea. They had a great performance every Sunday morning to get ready for church, they would cram into their giant Desoto and off they’d go down Jeep Road. They also had a boat and we used to go in it over to Kapiti. Father Mannix had a bach down here as well.

Before that, my favourite weekend activity was to accompany Harry Shaw on his milk round. I was horse mad and it all began with hanging out at the gate to pat Prince when he stopped to trim the taupata tree at our gate. I was quite young, so my first treat was to ride the cart to the end of The Esplanade and back to our gate. As I got older, I would then rise earlier to meet Harry at the beginning of the road and travel back as far as Number 1, driving Prince. There was always a stand of taupata there by the original cottage, and he would use it as his refreshment stop. That was how I knew later when I became a horse owner myself that horses love taupata.

Eventually, I would be out on foot at 6am or first light to walk all the way to meet Harry as close as possible to his farm on Matai Road, so that I could drive the cart for as long as I could. Not that Prince needed driving as such: he knew every letterbox to stop at, and waited patiently outside Kawatiri Guesthouse while Harry went in for his customary cup of tea. I would sit out there on the cart, whispering to Prince and watching his ears flick back and forth. The only time it took some real driving on my part was on the way downhill from Kawatiri to the shops. I had to push the brake lever on hard to slow the cart and prevent it pushing on Prince. It must have been all that taupata and the little rest combined, but invariably Prince would let out the longest string of farts you ever heard; one with every clip and clop on the way down the hill. The smell from up there behind him was awful, and the acrid deposits would sting my nostrils all the way home. Never put me off though. When Prince died Harry never got another horse.

One morning Harry was yelling all the way down The Esplanade that a whale had been washed up. He was like the town cryer and I think it very fitting that residents know a bit about the namesake of ‘Harry Shaw Way’. The whale story is told in Dad’s photos so I’ll let them speak for themselves. Another local Character was Fred Amos. He was the “beach inspector”: I don’t know how official the title, but he took his job very seriously . . . striding up and down the sands in his black beret and shouting at us kids riding horses. Fred and Myrtle Amos were very good to me and paid me well to feed their numerous cats when they went overseas to Japan. They had the scariest garden with a long dark path winding up through the bush. I used to hold my breath and go like hell. I still have the Japanese dolls they brought back for me.

If you drew a line from where the vegetation is now on The Esplanade, towards the sea was a row of huge pohutukawas. The council removed them to put in more parking, but the tree roots were keeping the bank up, and now we have all the erosion and definitely no car parks left on the sea side – all the land is in the sea.

It was a mixed childhood growing up on The Esplanade: long hot summers on the beach and a wonderful physical environment, but also isolated from most of my friends at Raumati Beach School. It took a long time to cycle to school, battling the winds with no gears, and I would leave early to pick up Wendy Moller from Glen Road or Rosalie Duke from Herbert Ave on the way. One night a Norwegian sailor walked into our kitchen, drunk and lost, trying to walk back to his ship in Wellington. We locked our doors after that! I still feel nostalgic when I walk the Raumati sands, beachcombing with my dog and kids, or swimming off Kainui Road. I came back in 1980 and 1986 to raise my kids here, and now my mokopuna are born locally, which makes this place truly home for me.

Some of my father’s photos have been used in the Lions Club historical calendars and have been displayed as a collection at the Paraparaumu Library, also in the Raumati South History Exhibition of 2004. 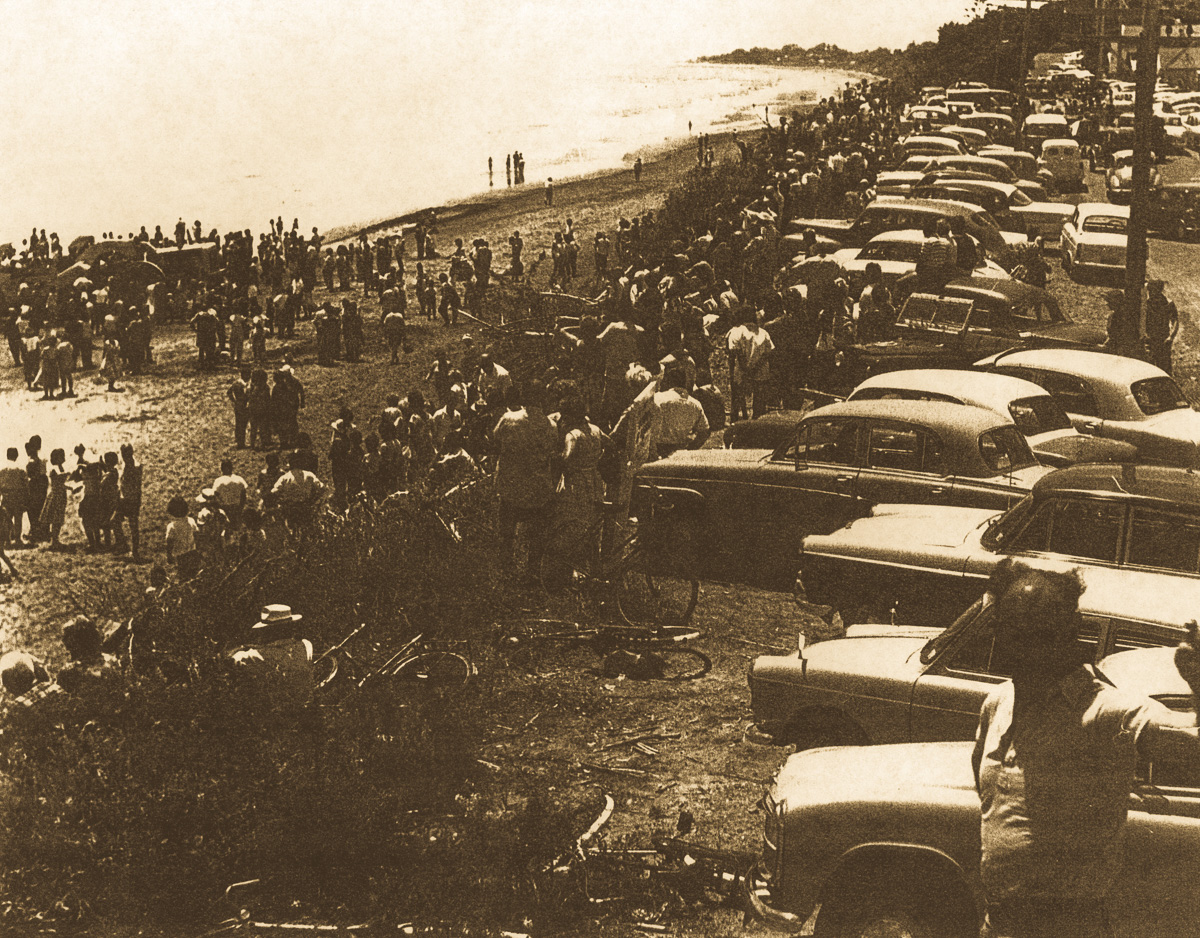 A large crowd watches as a Euclid tries to move a dead sperm whale which had beached at Raumati South near Kainui Street in 1961. By rule of thumb the 40 foot (14 metre) whale was estimated to weigh 40 tons. The intention was to move it to Queen Elizabeth Park for burial. Note: the coastline has since eroded by approximately 5 metres. Photo by Ted Witterick, contributed by Di Das.

← The Piano Playing Fireman The Optometrist and the Chemist →