St Paul’s by the Sea

The following is from a taped interview with Sister Mary Joseph and Sister Celine, who celebrated 50 years of the Presentation Sisters’ order in our parish in 2004.

The Queen Elizabeth II park end of Jeep Road is full of history: the site of a thriving holiday park known as Rainbow Holiday Camp, at exactly one week’s petrol ration’s distance from Wellington. Families would have to stay a week in the sea and sun before getting enough petrol rations to drive home again. The camp had a little store, a hall and many cabins.

The camp was bought by the Roman Catholic church and for a time post-WW2 used as a refugee camp for Dutch nationals, some of whom became permanent residents. In 1964 St Patrick’s parish built the church building, St Paul’s by the Sea. Soon after they sold the site, as it looked like it was under threat from future roading and it was not central enough for the parish.

A new property was purchased in Tongariro St, and there the building of a convent, presbytery, school and church commenced. The very popular Kapiti Christian School is now on the site in Jeep Road.

The Church St Paul’s by the Sea, Jeep Road.

Father Dunn lived in the camp before the church bought the property in Tongariro St. And also Father Havenman, who stayed a couple of years. He was Dutch and straight from the POW camps in Indonesia. He was a big man, but skin and bone when he arrived here – he weighed seven stone. He went back to Holland in 1954 to visit family, but never returned to this parish.

There was a hall at the camp where the parish ran Sunday masses – also a camp store run by John and Isobel Gilchrist. The church, St Paul’s, was built about 1964 in Jeep Road. The annual parish picnic was held here every year.

Val Swan had a holiday home on The Esplanade, it was always open to the sisters. He was very interested in the building of the church in Raumati South. The pulpit is the shape of a boat and the whole church has a nautical theme. The stained glass windows behind the altar depict St Paul and one of his shipwrecks. The pulpit, the statues and the sanctuary lamp are still in use today in St Patrick’s new church. The sisters are not sure what happened to the crucifix. Each side window of the church depicts the stations of the cross in stained glass.

Sunday mass may have been held at the hall in Tenniscourt Road prior to St Paul’s being built. But the service at 8.45am at St Paul’s was always the biggest congregation on the coast. A regular summer service was held in a hall in Goldsborough Rd Raumati, one in Centennial Hall, Tongariro St, one in Waikanae, one in Paekakariki and one in Kena Kena, six services in all every Sunday.

The first funeral mass in 1964 was for the much loved Sister Mary of Grace Merrick, a Presentation Sister who passed away at age 39, with much sadness to her pupils and the whole parish. She is buried at Paraparaumu. Her family were unable to come over for the funeral and it is only in recent years that her sister, also a nun, travelled out from Ireland to see her resting place. Archbishop McKeefrey also presided at the funeral. Incidentally the vestments in this photo are not still in use, but will be in storage somewhere here. 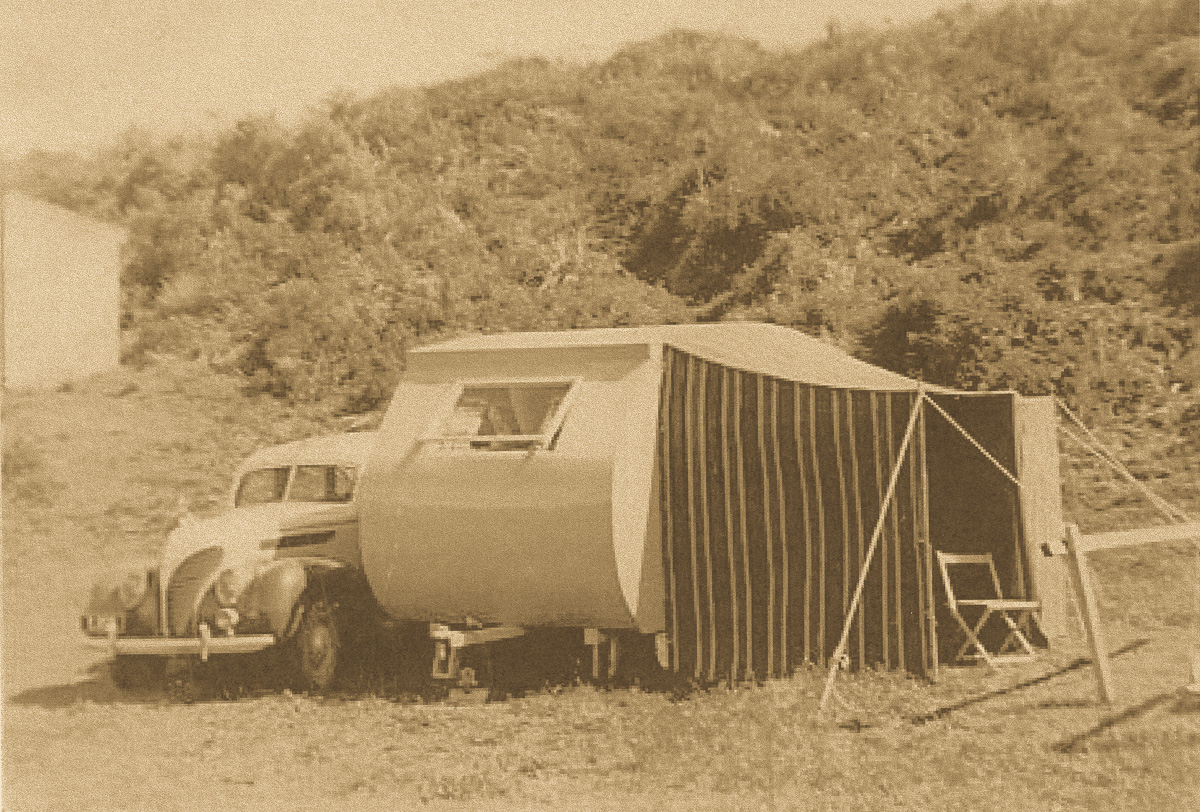 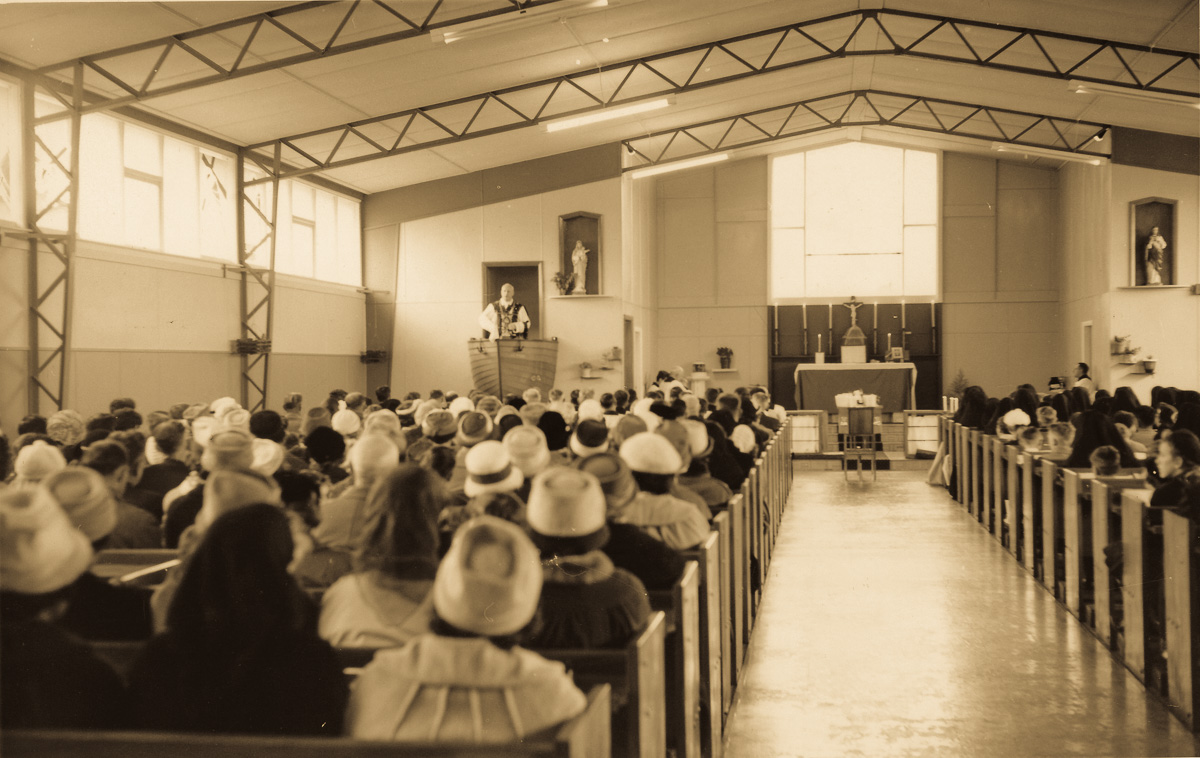 The window behind the boat shaped pulpit depicts St Paul and one of his shipwrecks. On each side of the building the twelve stained glass windows depict the stations of the cross. Contributed by the Presentation Sisters. 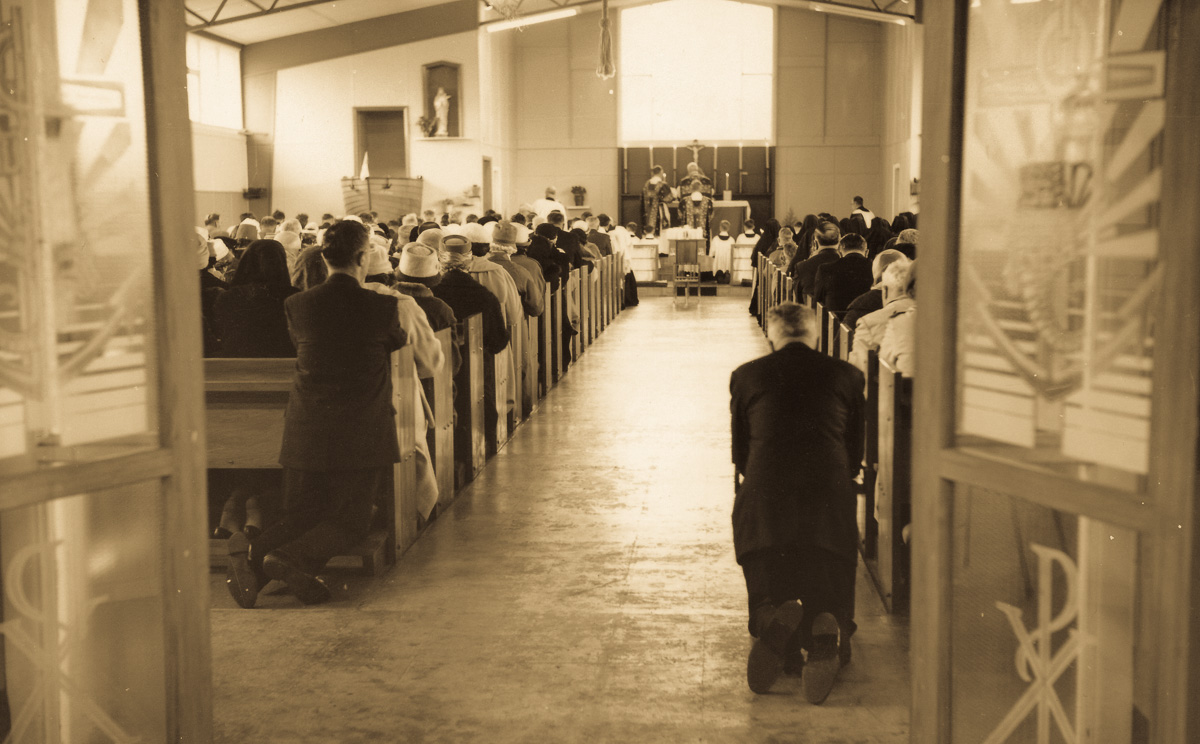 St Paul’s by the Sea. Photo shows the etched glass entry doors still in use today. Contributed by the Presentation Sisters.