Trevor was six when he first came to Raumati South. His family started coming for the weekends in 1932. Then his family bought a property and built a house in 1940 on The Esplanade. Trevor remembers The Cottage, 54 The Esplanade, which was the first house by the carpark. They moved a house from Pauatahanui, over the Paekakariki Hill on the back of a truck. Trevor says that a lot of people who lived in Raumati South in those days were just weekenders and that he can remember all the names of the people who lived in that area. “Leckies and us were the only permanent people. Mr Leckie was a builder.” Lenore came to live in the area in 1956, and can also remember that even then when you drove around the area you knew which houses belonged to permanent residents and which were weekenders.

Trevor attended primary school at Paraparaumu for a couple of years and reckoned he could get there quickest by riding his push bike, even though there was a bus he could have taken. Later he went to Wellington Technical College and took engineering courses. After College he became a Fitter and Turner Machinist in Wellington. He recalled the difficulty of getting in and out of Wellington in those days:

“We used to get a bus to Paekakariki and then get the train from there into Wellington. But there was no bus coming back which met the train and came on to Paraparaumu, so we had to hitch hike home every night. There was a bus for the late train so you could wait an hour and get that bus, but we were lucky enough to get a ride most nights, and then we’d walk in from the main road.”

Trevor and Margaret Eatwell helped form a Young People’s Club which met at the Eatwells, as they were allowed to use the playroom at the Guest House. After the War they used an army hut for their meetings and they had a billiard table and a table tennis table. Trevor says young people from all over the place came and the club continued for about four years with about thirty members, before people started moving away from the area and the club was disbanded.

Trevor was also involved in the beginning of the Model Railway Club and the live steam train that still runs at the Marine Gardens Park. He says there used to be a model railway at Bluegum Park too, but that was taken out and then they formed the Paraparaumu Association of Modellers.

Trevor thinks Marine Gardens were named after Garden Road, which he says was: “A very well established road that ran along the beachfront, but it’s been washed away from years ago, it’s an on-going thing.” Trevor recalls there was no Rosetta Road in those days, but he remembers Matai Road when it was just a gravel strip and Jeep Road being put through after the War. He says the Motor Camp was a popular place on Jeep Road.

Lenore says she did the usual thing as a wife and mother and was involved first with Plunket, then the beginning of the Parents’ Centre, and then as the children got older with the local Primary School and the Parents’ and Teachers’ Association. Lenore was Treasurer for a time and remembers the school fundraisers: “We used to raise money for the school by doing bottle drives – a most killing way to make money.”

Trevor recalls the Eatwell family clearly and he knew all the girls, but he says Margaret was more his age. He also knew Jack well and went to Taniwha Springs with him. Trevor remembers that the Eatwells had the store at the bottom of the hill by the old Surf Club, Tiromoana Road/Hydes Road. He says the store was closed for as long as he can remember, and that they sold the store before they had the Guest House. He says Rosetta Road wasn’t there then.

Trevor danced “quite a bit” with Jo Lopez (née Eatwell). He says “Jo and I used to go to quite a lot of the balls together.” Trevor then said that he also used to teach dancing in Wellington with Margaret O’Conner.

Trevor named the early residents that he remembered: Dawes, Chadwick, Rainey, Holden, Hydes, Leckie, Baker, McKenzie, Logan, Archie Shaw and Morrison the builder. Cudby and Shaw were the two milkmen then. Cudbys had a farm which extended from Matai Road and the corner of Poplar Ave to where the Raumati South School is now. The Cudbys lived on Matai Road but they moved during the 40s. McKenzie had what is now the Government Farm. Trevor said he used to cut manuka off the farm for firewood.

One of the local early characters was recalled when Trevor spoke of Bert, he knew him as a keen and very good fisherman. “I helped him drag in his net many a day. He was here when we first came.”

Both Trevor and Lenore talked about how people would get the train out from Wellington to Paekakariki and then walk up the beach to Raumati South and their weekend places. 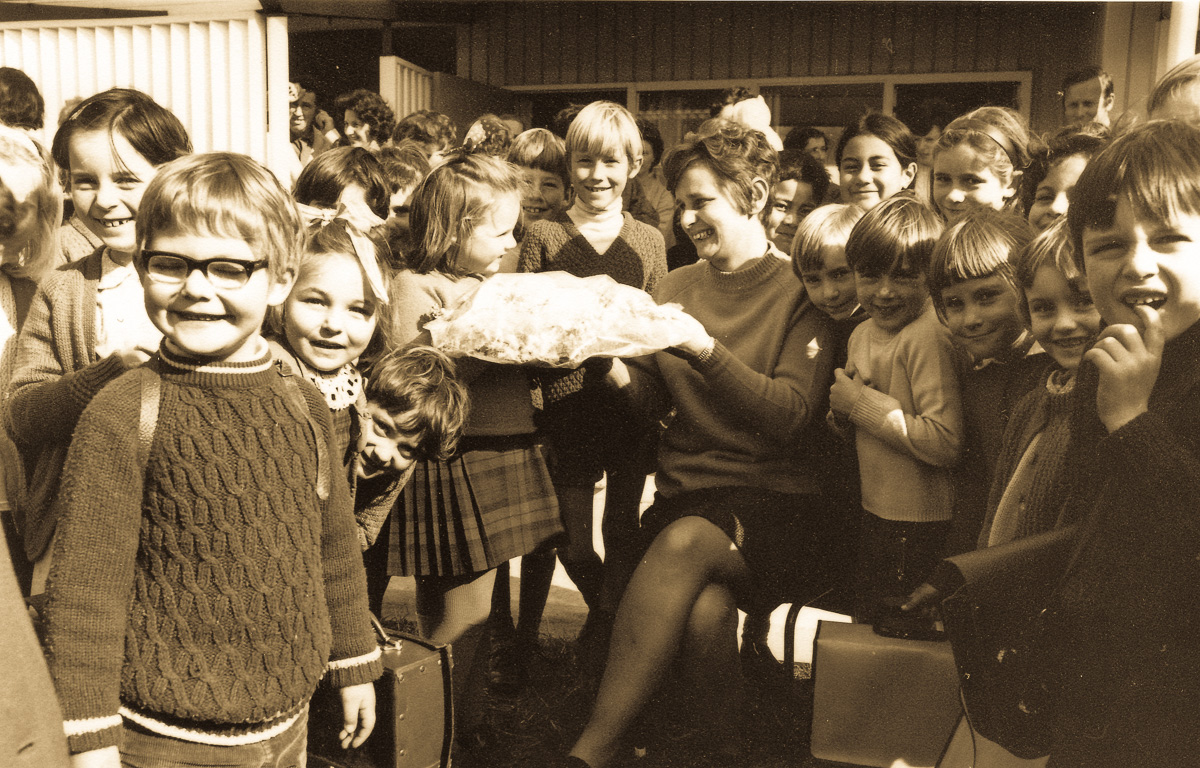 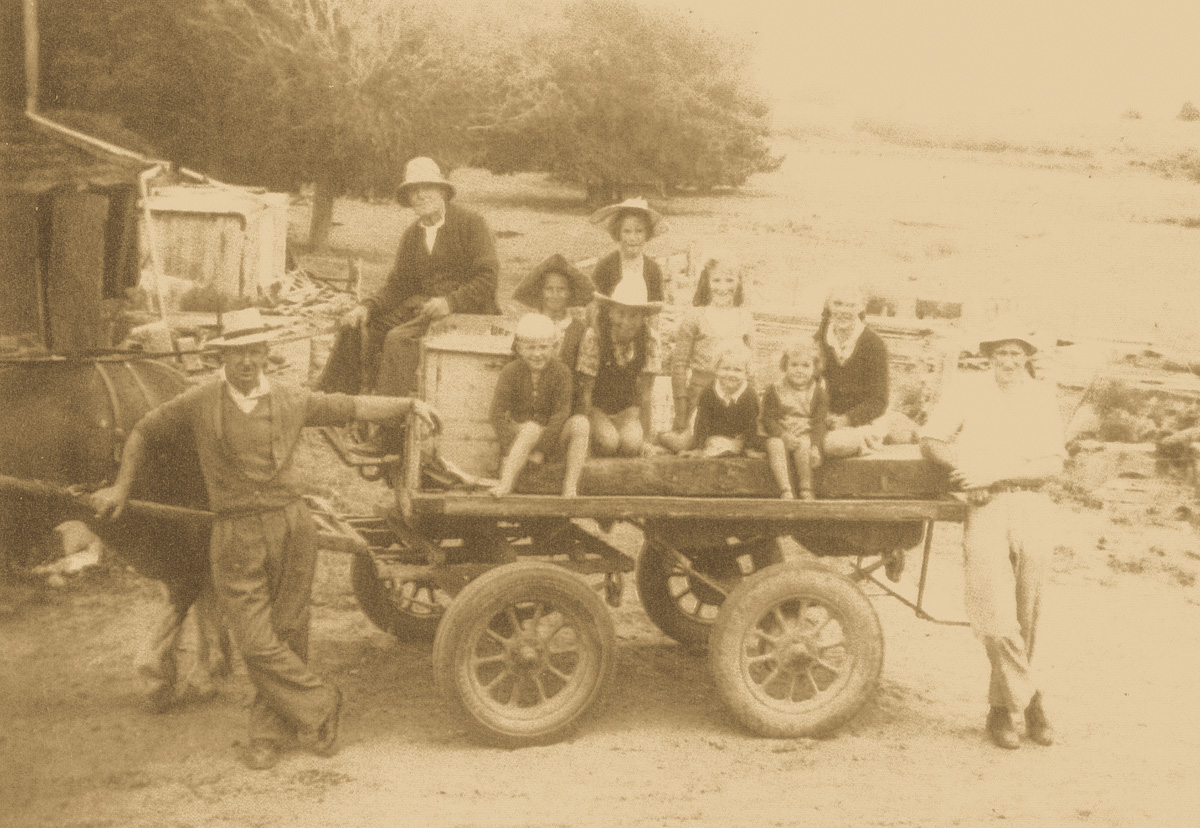 Children getting rides on the milk cart with Dave Cudby. Source unknown.

← A School of Our Own Our Bush Hero →