Some Answers and a Mysterious Question.

I moved here in the early 1930s, I was 18 or 19 at the time. I came from Featherston with my half sister who was a Cudby, and worked on Mr Cudby’s farm as a farmhand. The Cudbys’ farm, about halfway down Poplar Ave, was sold in 1952 to the Ministry of Works for the sandhills motorway. Mr Bob Semple negotiated the land sales. The peat had proved too soft for a highway, so the designated sandhills motorway was surveyed by the Marines’ surveyors to run from Paekakariki to around Peka Peka through the existing sand dunes.

Harry Shaw was a neighbour towards Matai Road and Mr Hyde over on Tiromoana Road, the Fortune family farmed the Hillcrest area to Raumati Road, and also the Metzenine family who farmed around Hillcrest Road North. A wooden two-storeyed farm building was still standing under the macrocarpa trees to the south off this road until the early 1980s.

Farmers in those days each owned about one piece of equipment for haymaking so we would work together, sharing the gear and haymaking each property in a gang. I remember seeing a wild boar run clean across the paddock in front of us on Metzentines’ property. Old George Cripps had built himself a cottage on Poplar Avenue opposite the end of Matai Road and the MacIvors had an egg farm on Matai Road here too.

It sounds like a lot of farms, but in those days each family were dairy farmers with only about 20 head of cattle to milk, eking out a living on rather rough land with swamps to drain and unfertile sandhills.

My job included loading the milk onto a cart each morning and at about 8am riding the beach from here to Paraparaumu Beach. There was enough sand in those days to ride the beach no matter how high the tide was. The only major area of erosion has always been where Marine Parade erodes now at the corner of Wharemauku Road. And yes, if they left it now the coast would revert back and we would lose the road and the houses into the sea here. Anyway I sold my milk, ladling it from the cans into billies, all the way along the beach, there of course being no Rosetta Road then, and took the dirt track of Kapiti Road to the dairy factory in Ruapehu Street opposite Paraparaumu School to sell the rest of the milk.

Rosetta Road didn’t exist and nor did the road State Highway 1 known as the Raumati Straits, so people would walk up here from Paekakariki or catch the Fields Express from north or south and catch a horse or buggy taxi to here. Once again no Poplar Avenue either, so it would make its way across from either Raumati Road or Matai Road.

In the depression there were five or six tent camps built in the area of the Poplar Avenue swamps to McKays Crossing. Single unemployed men were to come here for housing and food; they were not allowed to live in the towns in case they caused unrest. They spent their days digging the trenches to drain the Queen Elizabeth II Park swamps so the road could be built.

They also worked a quarry visible until the 1970s on the east hillside above the railway tracks to gain the hard building material needed to build the main road below. They swung from large wire seats and, armed with a pickaxe, smashed at the hillside all day long.

The loosened rock and gravel fell below them and was collected in a series of wooden runs and chutes, right to the spot in the road they were up to. The swamps, drained now of their natural water level, regularly caught fire with three different layers of complete forests being completely burnt through over the next fifty years.

One amazing thing we found doing this was that in the middle layer of forest (approximately 350 years old) all the tree stumps were facing the hills on the same angle, indicating that they had all been felled at the same moment. Possibly by a tidal wave, the sonic bomb from an eruption or a meteorite hitting the sea.

Development of Kainui Road and The Esplanade happened at this time also, during the Depression. Property owners Doctor Findley, Doctor Hogg, Doctor Webb and another I don’t recall completed this development and sold off the properties. I worked on this roading project, also digging out the roads through the sandhills with a horse-drawn scoop, no bulldozers then. The homes were built of pine boards and Dave Cudby and I creosoted them instead of painting to treat the timber.

After the Depression I did my engineering training in Wellington, met my wife and we moved to Blenheim where I engineered the Grassmere Saltworks. When our daughters reached an age to go to college they were going to have to board somewhere, so we made the decision to move back to Raumati South.

One of the houses we rented was on the beach front between the north end of The Esplanade and Hydes Cutting. One night in 1955 the tides rose so high during a storm that neighbours evacuated my wife and children in the middle of the night, with the water a foot from the front door. I was shift working in Wellington and unaware of the danger, although the first I heard was that a house had succumbed and fallen off the now dangerously high cliff into the sea. Our home never fell but we lost a pump house over the edge.

The resulting cliff face showed three distinct levels of pumice from three different volcanic eruptions. Some of the pieces were so big they’d cover half the size of the table here and we had them at home carved out for plant holders.

The beaches back then were quite clear of driftwood, as most of it has appeared due to clearing and erosion up the Rangitikei, Manawatu and Wanganui Rivers. There were far more shell middens here too with clean bright white shells. Some people crushed the shell up in machines right here on the beach to sell as bird grit for the hen farms. Locals also scooped it up to make shell paths for their gardens. 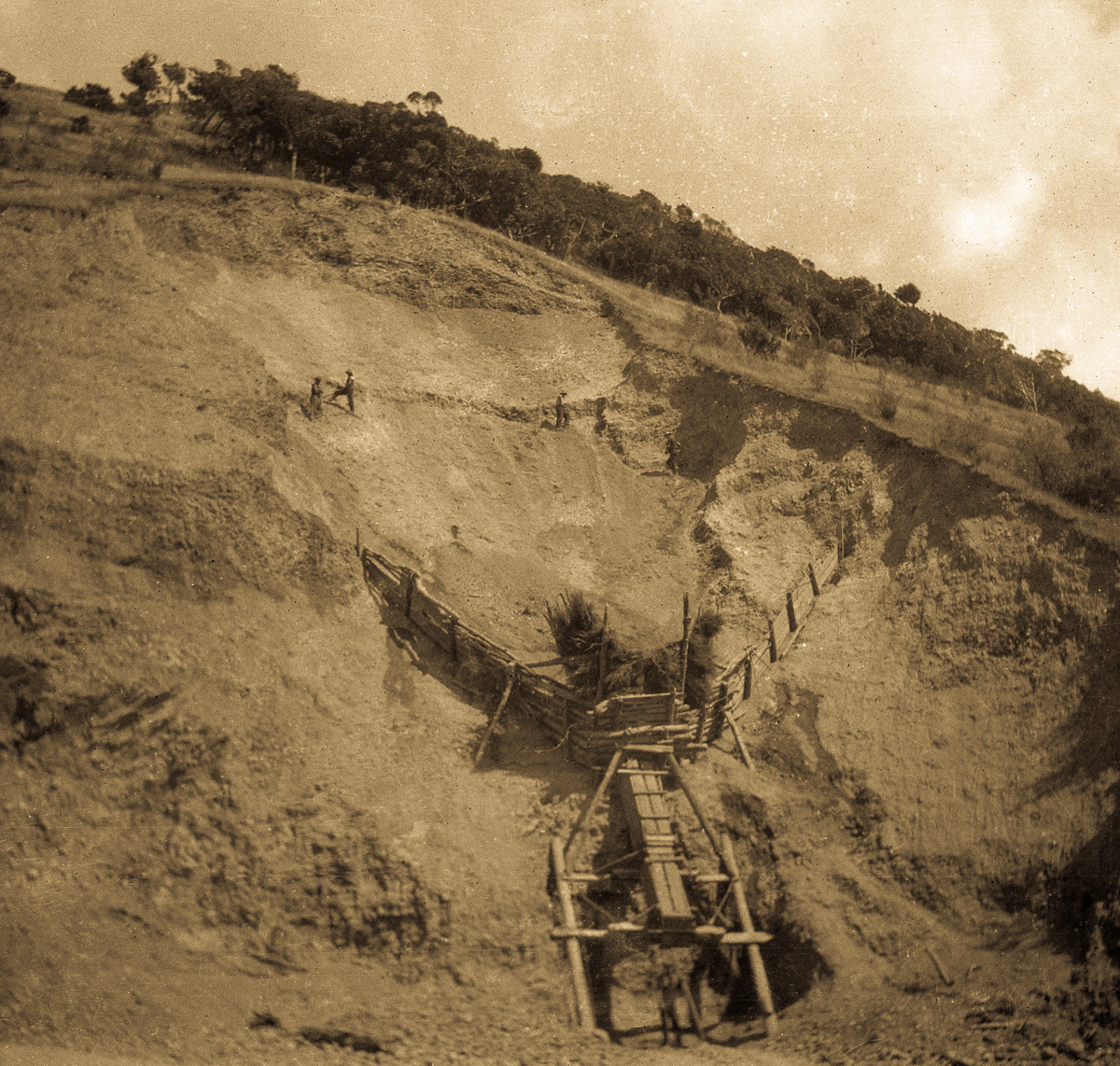 Raumati Quarry. Hillside on Hadfields’ Farm. Gravel used for the Main Road, Raumati to Paekakariki. The men would swing from ropes, loosening the gravel with picks and hammers.

← Pipes on the Village Green A Garden by the Sea →