Gwen Thomson, a resident of Tiromoana Road, was in the rag trade in the early days in Christchurch. Upon coming to the Coast in the 1950s she worked briefly in Centre of Fashion when it was in Maclean Street, before being talked by her sons into her own business, the very successful fashion store in Margaret Road Raumati Beach. Gwen still lives at the original family home in Tiromoana Road, a familiar face, doyen of fashion to this day, and very special family friend.

Gwen’s five children include Richard and Des, who have represented New Zealand in cycling events in the Olympic Games. Richard, or Richi as he was known, took up cycling at 14 when he took his old school bike along to the New Year’s Day bike races, which he won. He was seen by Mr Roy Dutton of Raumati South, who considered he showed some talent as a cyclist and interested him in the sport.

He first represented New Zealand overseas in December 1960 when he paid his own way to Bendigo Australia. Next was New Caledonia in 1962. The first really big event was the Empire Games at Perth Australia in 1962. Two more trips to New Caledonia followed and then in 1963–64 Richi again paid his own way overseas, but this time to France, then other parts of the continent, and finally England for the Tour of Britain.

This all led up to the Kingston Commonwealth Games, after which he went to Germany and rode in the World Championship to become the first ever New Zealander to finish the championship. He came 47th out of 165 starters, approx. 1¾ minutes after the winner. Following this was the 1967 6-day Tour of New Caledonia in which he finished second.

Younger brother Des first represented New Zealand overseas at the Tokyo Olympics followed by the 4-day Tour of Tasmania in 1965 where he finished fifth. Next was the tour of Britain, in which he also won the Roy Allan Hart Memorial Trophy. From Britain he went to Belgium and Holland where he competed mainly in Criteriums in preparation for the World 120-Mile Championships.

Des’s highlight at age 28 was the Jamaican Olympics in 1966 where he was second in the 120-mile event, thereby gaining the silver medal for New Zealand. Unfortunately he had a crash on the return leg which put him behind the second bunch. His effort in capturing and passing both them and the leading bunch to win the silver medal gave him considerable recognition.

As a child I would often complain to my Dad about the length of our regular car journeys from Paraparaumu to the National Park side of Mt Ruapehu. My Dad would say, “It’s nothing! Richi and Des Thomson would set out every morning before breakfast on their training cycles, wet or shine, and cycle from the Raumati South turn-off right up SH1 to Waiouru and back and still go to work on time.”

In awe, us children would sit and quietly contemplate this amazing feat over the journey. As an adult I asked Dad again if indeed they had cycled this far. “No,” Dad laughed, “I was pulling your leg a bit. They only cycled as far as the Bulls turnoff to Taihape.”

From an interview with
Gwen Thomson by Jacqueline Elliott 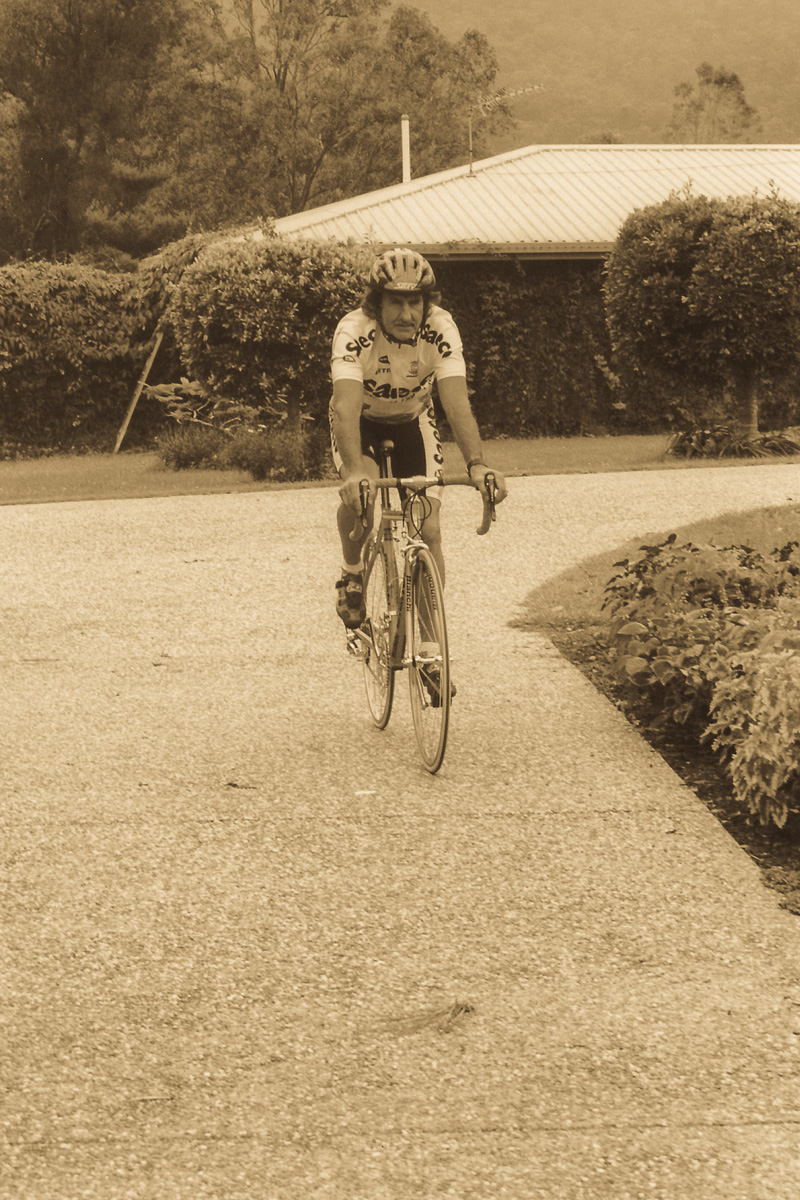 Des Thomson on his training cycle. Contributed by Gwen Thomson.

← The Optometrist and the Chemist The First Kindy →