Our family camped at Raumati South in the summer of 1934 – 35, when I had just turned two. We had a tent (I think there were pine trees) on the corner of Rosetta Road, opposite Eatwells’ Kawatiri Guest House. My parents then bought the section just north of the tennis courts, on Tennis Court Road, and my grandmother Bessie Cook bought the adjoining one to the west, on the driveway off Poplar Avenue.

Mum and Dad must have built shortly afterwards, as I can’t have been more than three years old in the first photo of the bach, and maybe a year older in the next. The bach was extended in later years, with a concrete deck in front and a trellis where Mum grew Paul’s Scarlet roses.

The photos show, below the bach, a flourishing vegetable garden and a tent where Dad later built a garage. The latter contained cooking and washing facilities and two double bunks also made by Dad. He was headmaster at Apiti School at the time, but he loved building and was a meticulous carpenter. Later he planted a double row of pine trees along the south and east boundaries. This was a mistake, as they weren’t pruned and ended up too tall, still letting the wind through at the bottom, and felling them was expensive.

Water was supplied from rainwater tanks, though some of our neighbours had pumps. There was always a danger of someone leaving the tap running and some families kept the tap handle in the care of an adult.

Beyond the bach is the long-drop dunny. Dad dug the hole and when necessary he filled it in and moved the whole thing further on. Just visible beyond the rise on which the bach was built is The Bus on Gran’s section. This was converted into a cosy home by my uncle Bert, and Gran lived there until she and her eldest daughter Madge moved into a proper cottage on the same site. For some years Madge ran a pre-school based in an army hut behind the house.

The path to Poplar Avenue and the beach led between our section and the tennis courts, and up the hill past the Comparinis’, the bach seen on the slope above the courts.

The Perry and Manthel families stayed in the Manthels’ two cottages on the hill above us, on the opposite side of Tennis Court Road. For many years the children of our three families and assorted friends spent our school holidays together. At one stage the first gathering would be on the reserve beyond the tennis courts, where the decision was made on the rules for games of rounders, which varied at our different schools. As teenagers we were more interested in tennis, and we would play from 7am on, since after 8 we’d have to pay at the shop. We did a bit of surfing on long wooden boards, and sometimes caught flounder and kahawai with flounder nets, the tallest person taking the seaward pole out as far as possible.

One summer our favourite activity was sledging down the slope of slippery dry pine needles behind the Manthells’ on a wooden sledge or a wooden ladder holding two or three passengers, its runners greased with fat. At the bottom, however high, we piled up pine needles. Our sledge was inclined to plough into a vegetable garden and uproot the gardener’s carrots, which he didn’t appreciate.

Coming from a strong Presbyterian tradition, Gran was horrified to learn in those first days that the section on the corner was likely to be bought for a dance hall. She either bought it or persuaded the Presbyterian church to do so, and for some years she’d have a cake stall under a tree near the shops, to raise money for a building. Before too long the church was built (using army huts, I think) and there Gran played the organ for services and Aunt Madge taught the Sunday School. Before the church was built, Sunday services were held sometimes in someone’s front room or in our garage.

The church was closed when members of the dwindling congregation, who nowadays have their own cars, chose to join with the larger group at Raumati Village. 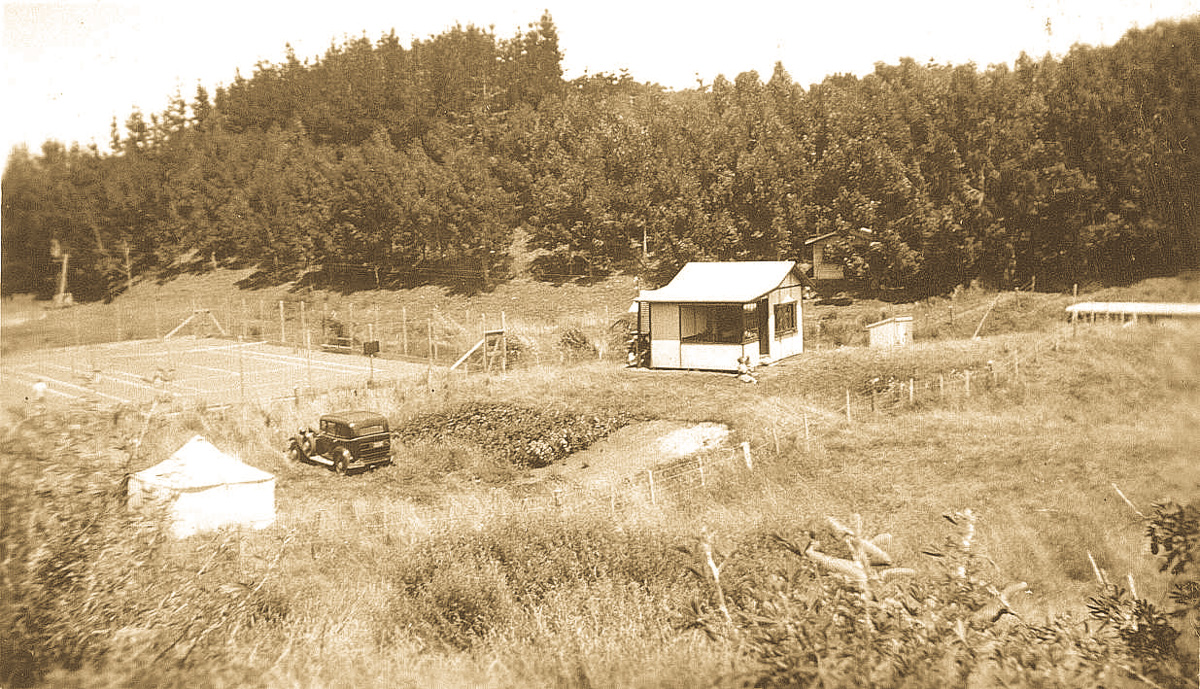 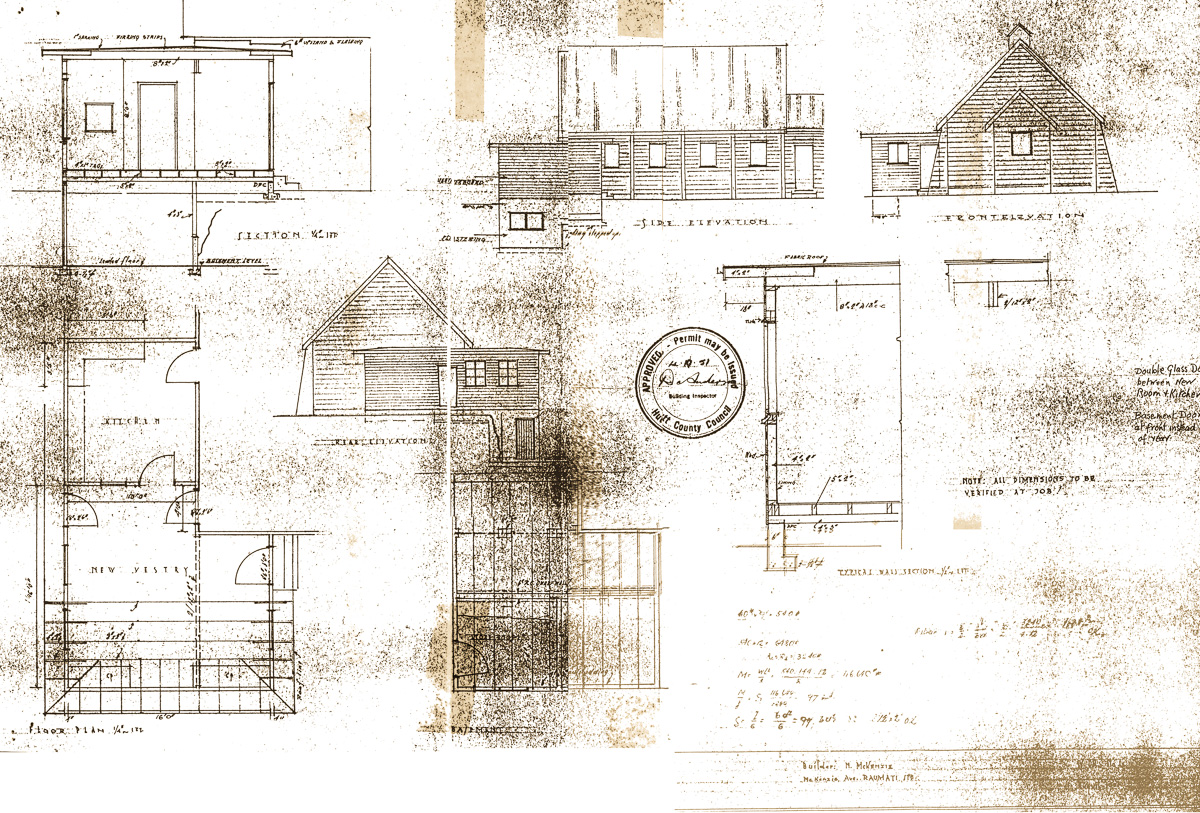 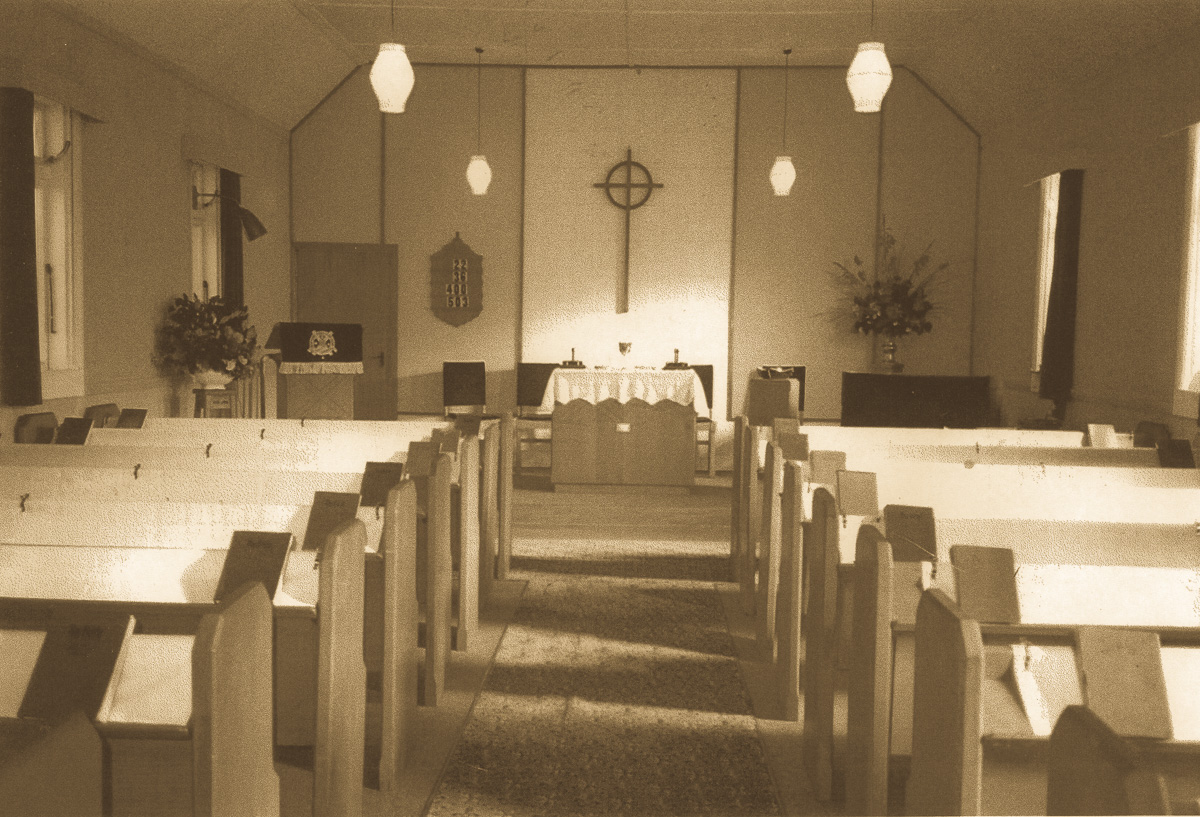 The interior of the church restored in 1997. Contributed by W. Scollay.