As a young lady Mrs Doris Scott came from the South Island and, like so many other young ladies, trained as a nurse at Wellington Hospital. A highlight of those times was being able to visit the Kapiti Coast on the weekends. She had an Aunty, Millie Howell, married to a farmer. They farmed Howells’ Farm right across the hinterland coast where Coastlands is now. Early in those days Millie’s husband died and the farm was taken over by her sons, Bill and Rewi. They also had two younger sisters who have since passed on. Doris also had a nurse friend who had a boyfriend here working on building Rosetta Road. When they came out here they stayed at Kawatiri Guesthouse.

During the war as a young married lady, Doris and her husband first came to live in Raumati South. Their Esplanade home, on land subdivided by Mr Rainey, was a little bach in a wee dip in the section south of Number 54 The Esplanade. The area was largely a swamp, with manuka bush running right from the bend in the middle of The Esplanade to the park. The flax on the section was so high you couldn’t see past it out to sea, so in 1950 the opportunity came to buy a home with a view and Doris has lived there ever since. It was then also a bach with one room, a fireplace and bunks, and has been added onto many times since.

Today, a clear crisp May Saturday, Doris can’t believe she is 92 and suddenly faced with old age. She is a living testament to the old adage of sunshine, sea and fresh air to maintain good health. We sit here in a sunroom high above the seawall and listen to the rolling waves crashing with a formidable rumble against the seawall. Each rumble shakes the house and Doris notes that they are coming from an unseen storm far beyond the horizon. And that this very full high tide is as rough as it has ever been in her sixty years here. Unbelievable on such a perfect still day.

On Christmas Day 1932 young Doris went on a Howell family launch across to Waiorua Bay on Kapiti Island. Being from the South Island she hadn’t met many Maori. She was struck by the polite and very handsome young Webber men. They were home for the holidays from Te Aute College, and had their own boat to fish with. The meal was beautiful and there were many Webbers and Howells at the table that day. It must be remembered that the family farm at Kapiti was completely self sufficient with beautiful gardens. Doris got up for a wander during lunch and came across an old Maori woman in the smoke house behind the main house. She was bent over with layers of clothing and a full moko tattooed on her face. She couldn’t speak English and sucked on a small clay pipe – quite a shock for someone so unfamiliar with the Maori. The Webbers had been there since 1910. She had known Chief Te Rauparaha, and grew up with Chief Te Rangihaeata and was a part of their family. 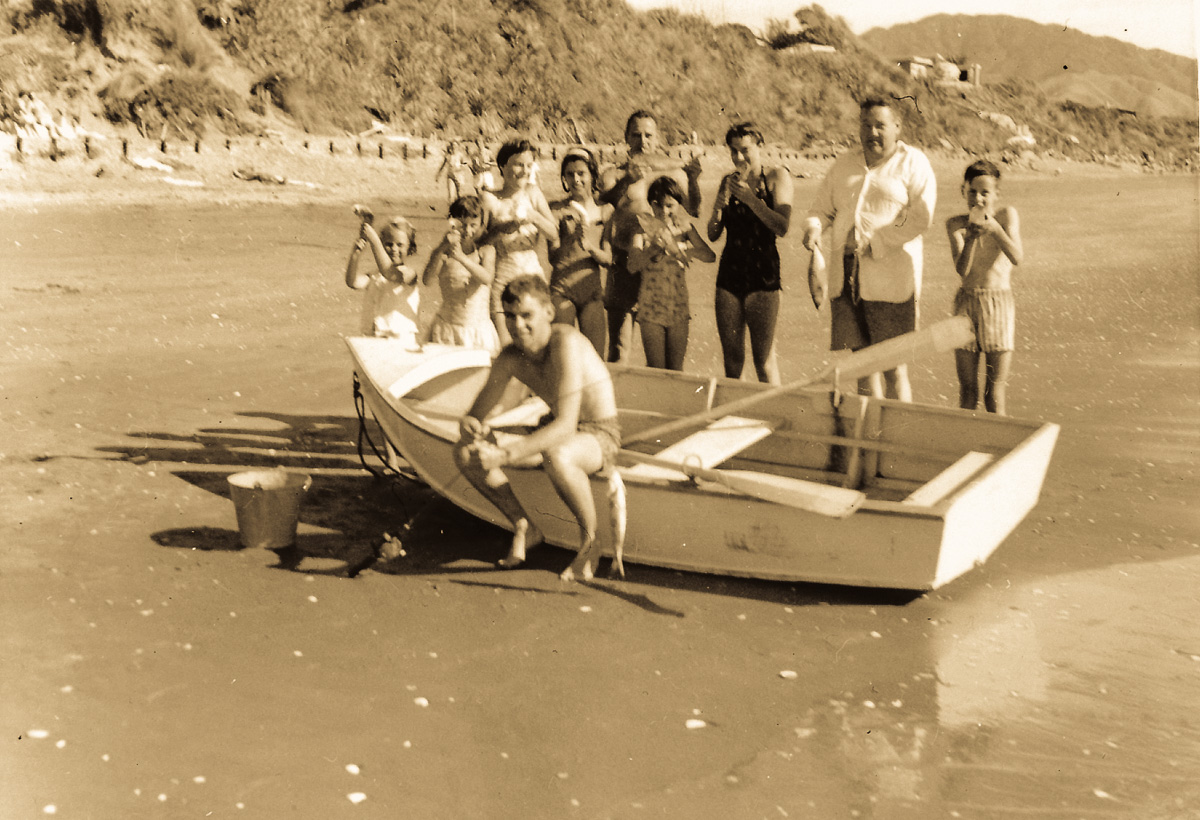 Poulton family with boat. They often spent all six weeks of the summer holidays here. (Showing the sandy beach with no seawall.) 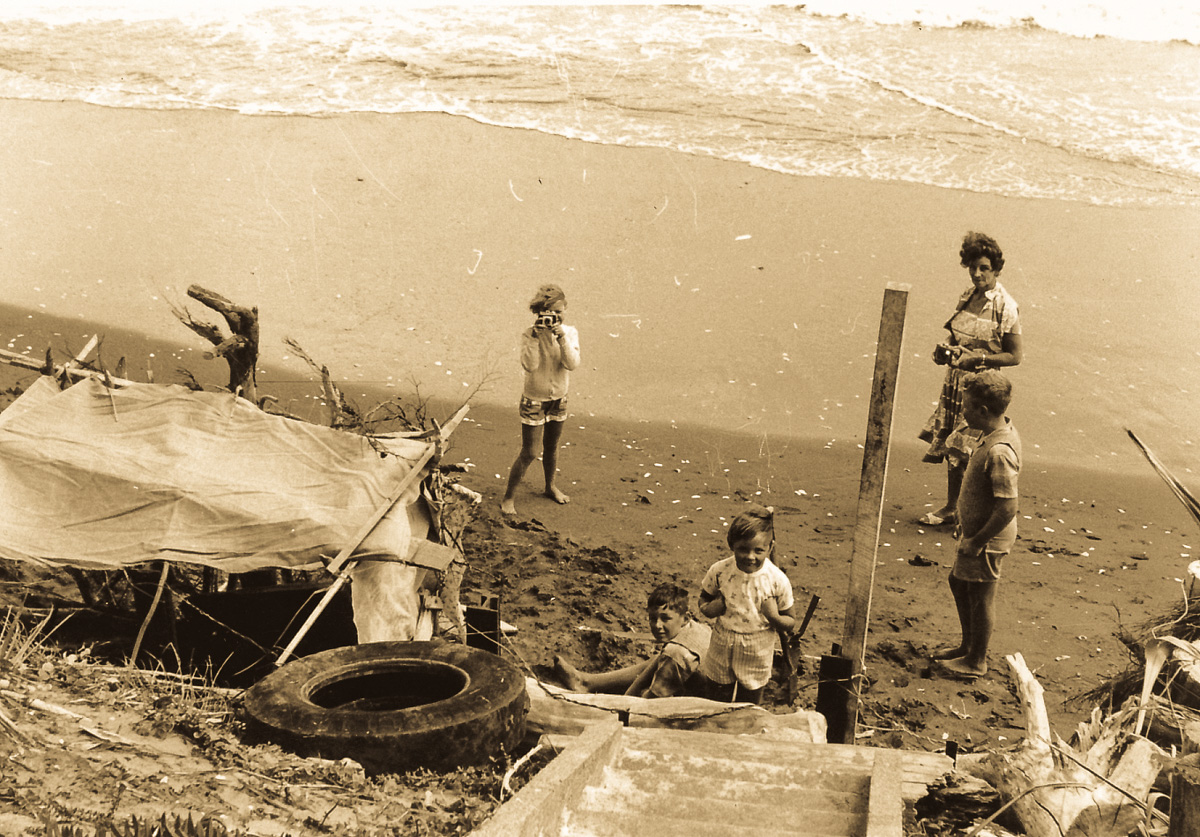 Poulton and Scott children building forts and pitching tents on the Esplanade Beach. 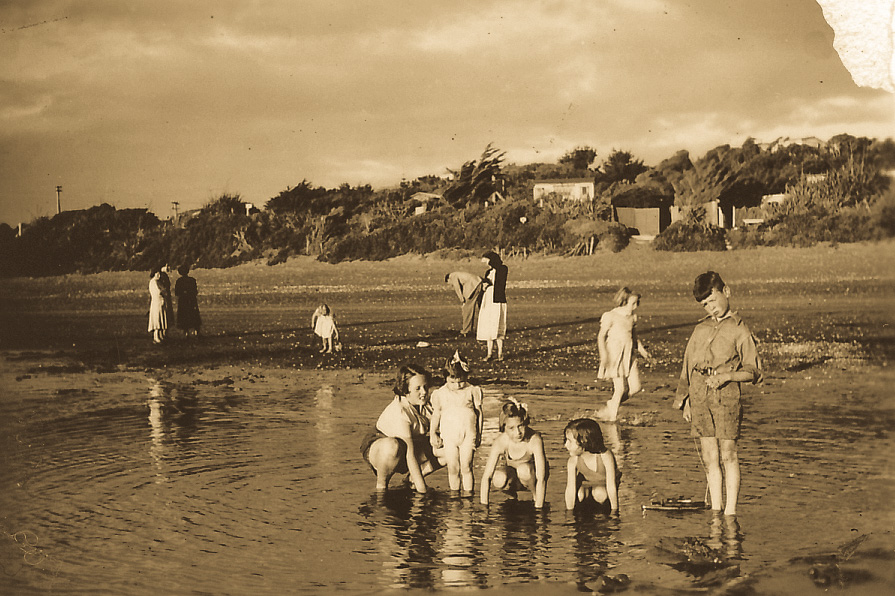 Pipi fishing, doing the pipi dance on the Esplanade. Pipis, like fish, were bountiful at the time. Fortunately the pipi beds of Tainui Street are still flourishing. 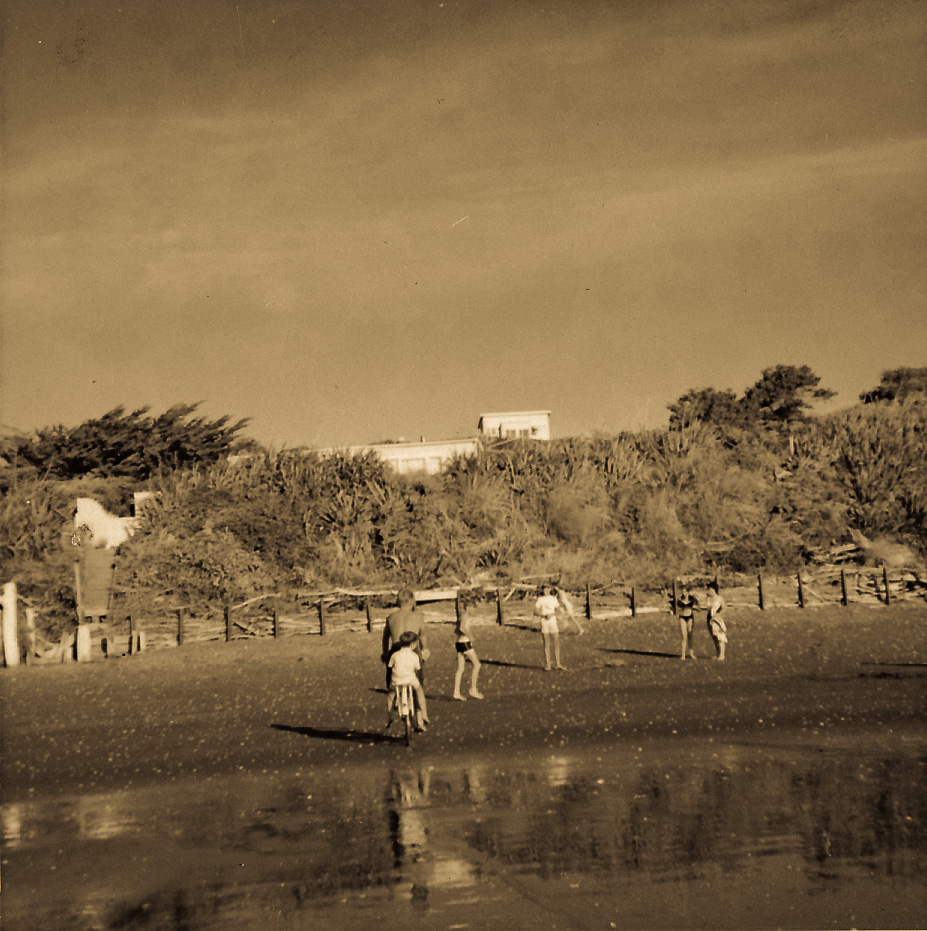 Children at play: a timeless scene. Poulton and Scott families on The Esplanade. 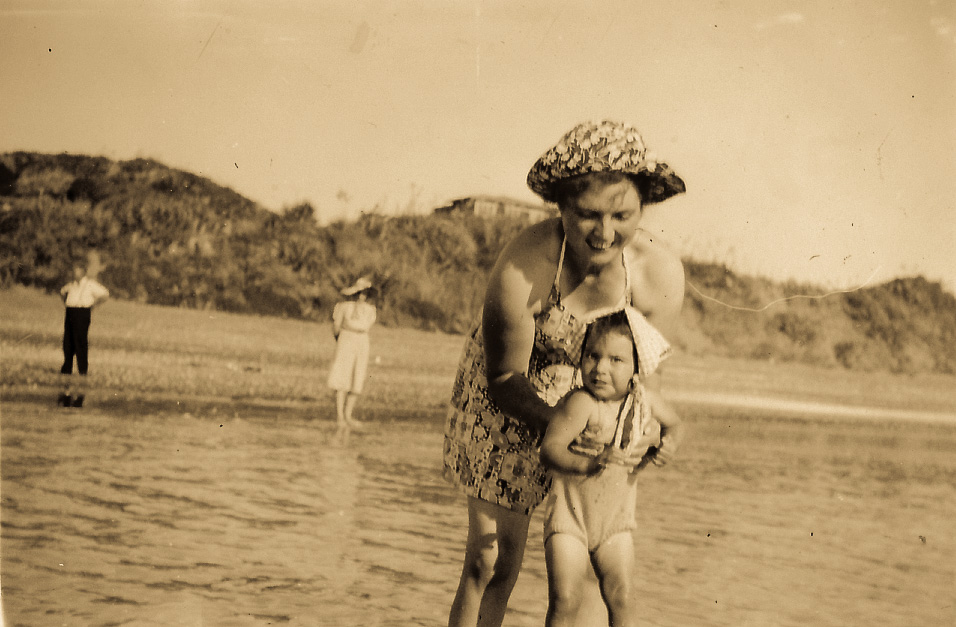 Mrs Poulton and toddler, The Esplanade. 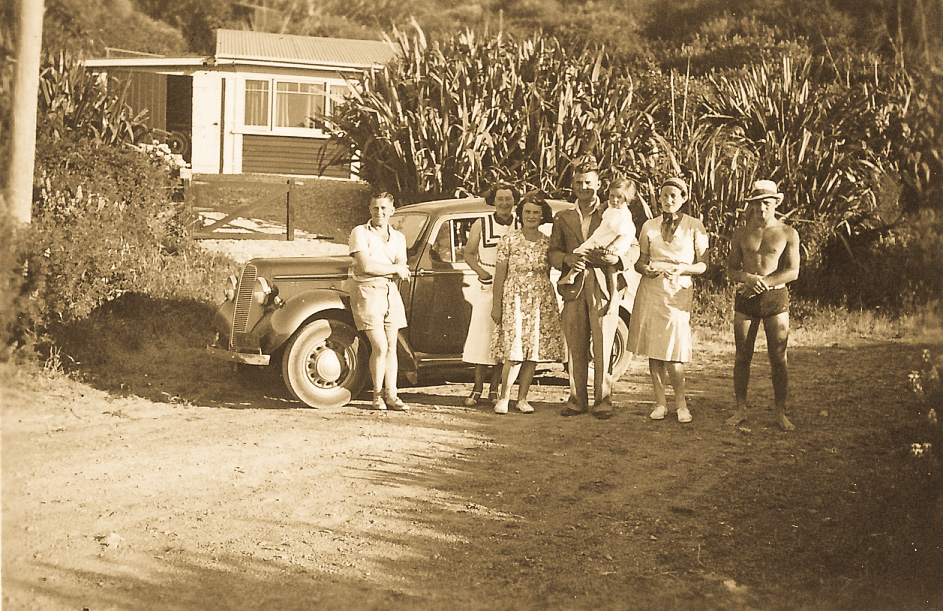 Mr Humphrey Rainey’s house. He sold all his sections at the south end of The Esplanade to public servants from Wellington. 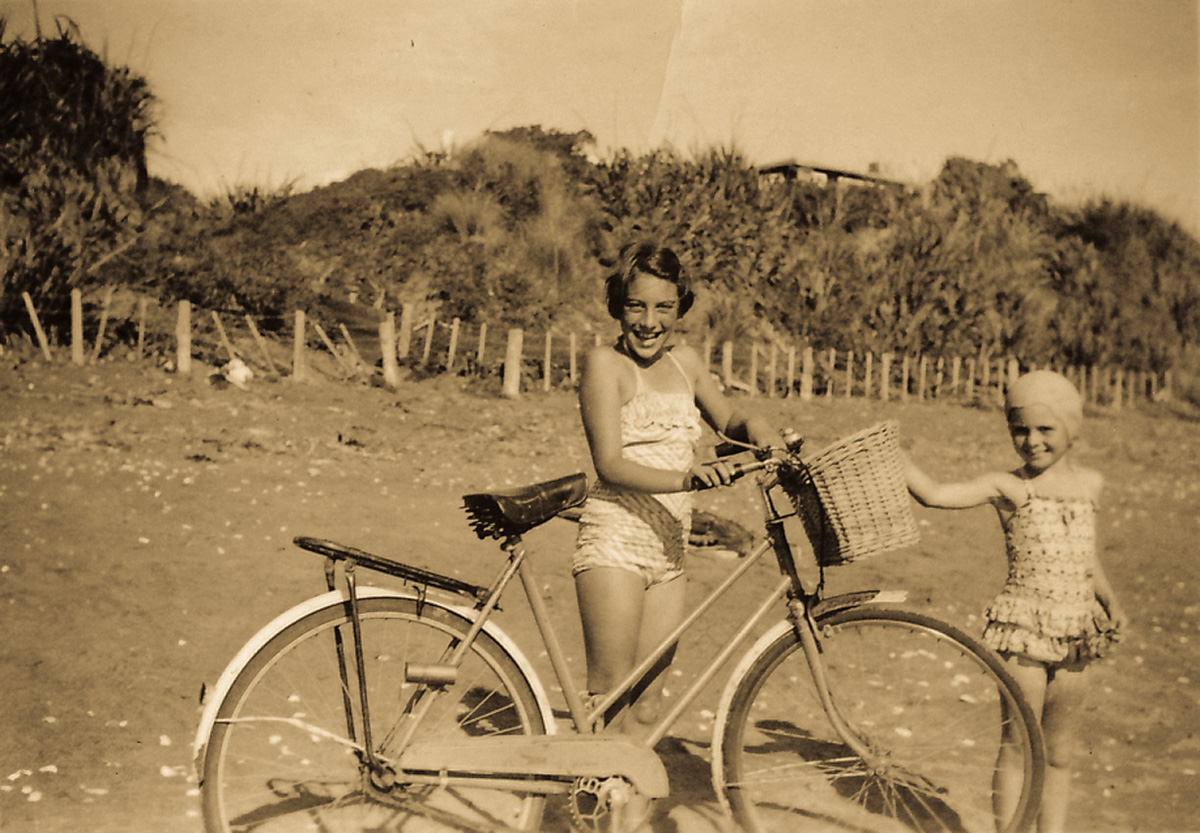