We came to live in Raumati South in 1966 and were fortunate enough to purchase our home on the corner of Poplar Avenue and The Esplanade – a home we had admired for several years and never expected it would ever come on the market. The beach just across the road was a wonderful playground for our five children. Our neighbours on the other side of Poplar Avenue were an elderly couple, Arthur and Kitty Hyder, who came from Ireland. Years before this they had purchased the land which is now Leinster Estate (named after their County in Ireland), and had it sectioned and roaded. One of the streets in this area, Sydney Crescent, was named for their son Sydney. I think the roadhouse “Big Tex” was eventually built on the Leinster Estate. Kitty planted the trees lining the road, and the road was named Poplar Avenue. This avenue is the main approach to Raumati South, turning off from State Highway One and meandering through the village, up the hill and dropping down to the beach (“Rees’s corner”) where it joins The Esplanade.

Over the years we experienced some very high tides but nothing to compare with one which occurred some time in the mid or late 70s. It was horrendous and everyone who had a home on the hill high above the beach was in mortal fear of losing it. In fact this did happen to one home at the beach end of Hydes Road/Tiromoana Road. We stood and watched in horror as it slowly slipped into the raging sea. There was a great deal of erosion all along that coastline and eventually enormous boulders were rushed in to build up a protective wall. This must have worked, as I don’t think there has been a problem since.

Raumati South was a very pleasant place to live and a great lifestyle for children. We had a thriving little village with a “Four Square” supermarket run by various people over the years. I particularly remember George and Jo Sanderson. Next door was a small library, also a pharmacy with Magnus Priest at the helm, who later extended his business to include optics. Magnus Priest was a Scot from The Shetlands, who with his wife Annie came to New Zealand in the early 50s. I had the good fortune to be a passenger on the same ship on my return from a stint in the United Kingdom, and became firm friends with this delightful couple.

Across the road in the village right on the corner was a grocer named Kneale Mark, and later it was taken over by Lawrence Paul. A couple of doors up was JUT, the local shoe repairer. He was an Australian, and you never wanted to be in a hurry when you went in there. There was nothing he liked better than a good long chat!

Around the corner was a butchery, and next door a greengrocer by the name of Geoffrey China. That was not his surname, but the title our children gave him. He had not long been out from China, having jumped ship. He slept on a mattress at the rear of the shop and was in mortal fear of being traced and sent back to China. He spoke very little English but had an engaging personality. He was a great cook, and several times he came to our home and took over the kitchen, creating beautiful dishes that we had never heard of before. He drove a broken down old truck in which he would rattle around the area making his deliveries. Our boys called this truck his “Karate Chop” as it had a definite drop in the middle as though it had been hit by a giant hand!

There was also a small Post Office across the road and yet another grocer by the name of Kindell, I think. There was certainly no shortage of grocers, but they all seemed to thrive.

Along the Renown Street side of the Square, at the end, another general store opened owned by Henk Kraayvanger. Henk was a genial Dutchman and always greeted us with a big smile. Geoffrey, my husband, also had a big smile when Henk was selling a job lot of cans of Brunswick sardines at 10 cents a can. That was a terrific bargain even in those days and I think Geoffrey bought his entire stock! One day Henk had a bit of a scare when two young lads rode their bicycles into his shop, bursting through the plastic strips of fly screen brandishing ‘pop guns’ and demanding chewing gum. I know this is true because one of the boys was my son Jeremy!

All the shops seemed to thrive until the advent of Coastlands, the huge shopping mall in Paraparaumu. When that happened most of our little village shops were forced to close their doors.

I forgot to mention that there was also a quaint little second hand shop where almost anything could be bought. Our black cat ‘Sooty’ even found himself in the window one day – not for sale! He had taken himself for a stroll down to the shops and thought that the sunny display window was inviting, so very carefully he picked his way through the ‘priceless’ china and took up residence for an hour or so.

I imagine that many people will remember the dairy on Rosetta Road, half way between Raumati South and Raumati Beach. Over the years that little dairy played an important part in our lives. It was always open and provided everything that was necessary for day-to-day living. Several people occupied it over the years, among those the Laracy family stand out as being special. These days it has been converted to an extremely successful café of which my daughter, Joanne, is the co-owner. I have very fond memories of stopping at that dairy on Sunday mornings on our way home from Mass at Paraparaumu. Little did I think it would eventually become a thriving café, run by a member of my family, and a mecca for local people and visitors alike.

Even though I no longer live in the area I am fortunate that my ties remain strong through my contact with Café Rosetta, and also through my son Tim, who has not moved far from Raumati South. Tim owns the Maclean Street fish and chip shop in Paraparaumu Beach.

It is good to know that my family spent their formative years in such an idyllic place as Raumati South, and I know they have very happy memories of their childhood there. 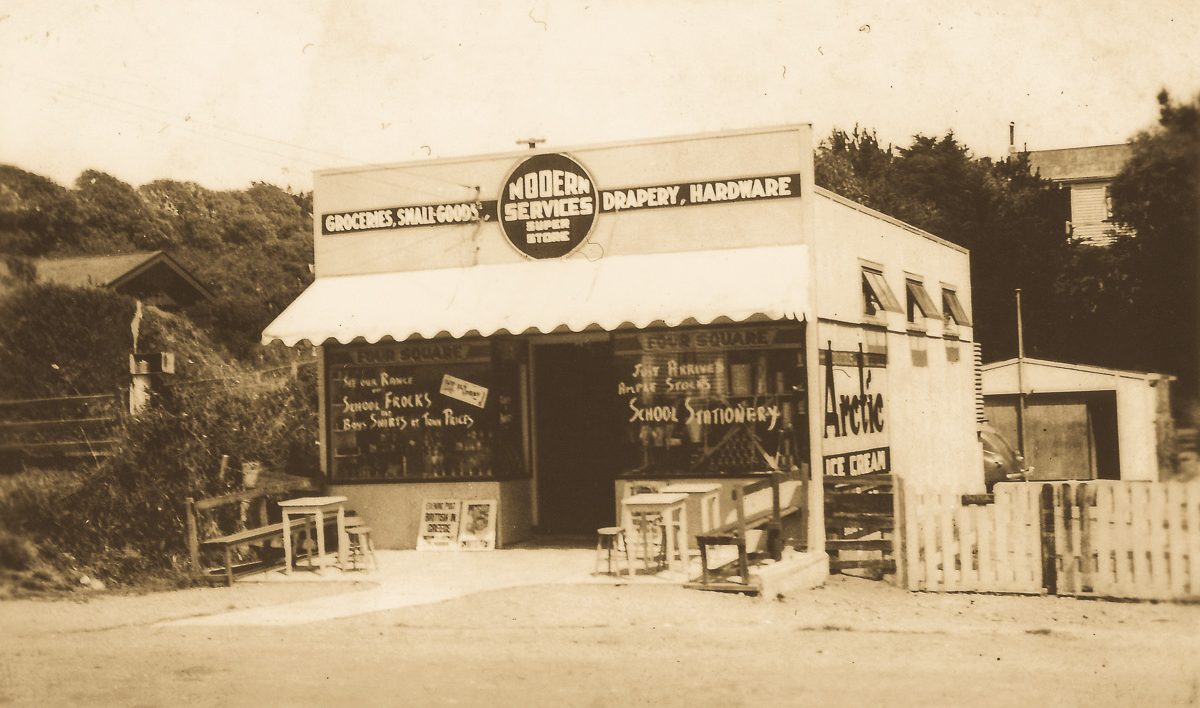 Opened 8th December 1945, Modern Services Dairy Rosetta Road had one of the few licenses to sell liquor available in the country. A planned picture theatre to be attached to the north facing wall was never built, although outdoor pictures were shown. The 14 foot high stud on the north wall was built to accommodate the screen. Contributed by Mrs Gladys Rees.