My earliest recollection of Raumati South was renting Hoby’s cottage at the end of what is now The Crescent. It had no electricity so Mum had to cook on an oil stove and at night when Dad lit the lamps the insects would come around in their swarms, making sleep uncomfortable even after the lights went out. I think this was around 1934. Mr Hoby who owned the bach was a dentist in Wellington and lived in Khandallah, where we also lived. He had three daughters, Margaret, Katherine and Esther, and one son named Arthur. We were a family of three girls and a boy – I am the eldest, then come Margaret, Patricia and Howard. Hoby’s bach was close to the beach: we would run down a path, which took us on to it directly. There was no road along the front. The sand dunes made a gentle slope, providing easy access.

The next bach we rented was on the corner of where Poplar Avenue meets The Esplanade. There is another house right on this corner now; the one we had is just above it, and interestingly enough is painted black and white, which is similar to its original. Being wooden and near the sea it was painted in creosote in those early days. It belonged to the Turners.

Another house we rented belonged to the Irwin family. It was approximately at the end of a track which is now Aotea Road, off Rosetta Road towards the beach. At this time Irwins’ house was one of a few which was built above the sand dunes and had a good view of the sea. I remember a car being driven down this track and onto the beach. In those days the tide did not come right up as it does now, so the top part of the beach was always dry and of course soft. This car got stuck in the sand as it tried to leave the beach. Pushing and pulling did no good. Dad asked the owner whether he had any rope and was told there was a rope in the boot. Dad then suggested the tyres be let down to about halfway, which would make it easier to push and pull the car out. He was laughed at but some time later when all else failed the tyres were let down somewhat and the car was pulled out by another car.

People by the name of Van Praagh had a cottage a little further south from Irwins’, and this was our next holiday home. These places took us through the 1930s. Finally, through Hugh Bliss, a solicitor from Wellington who also had a cottage nearby and whom Dad knew, we bought the bach in Rosetta Road, almost opposite the end of Menin Road. It was nothing more really than an oversized lined wooden shed, so Dad had two bunkrooms added, put in a fairly primitive bathroom and upgraded the kitchen. From 1940 until 1946 we had all our holidays there. It’s probably beyond the area now called Raumati South.

Kawatiri Guest House was really the centre of Raumati South. (The whole local area was apparently originally known as Kawatiri.) All year round people would come there for a break. It was extremely well run.

There was a shop which sold everything and was a post office as well on the corner of Poplar Avenue and Renown Road. Mr Irwin, who rented out houses for people, had it at one stage and Mr Cummin at another, as I remember.

Of course the road in from the Main Road was down what is now called Poplar Avenue. It was thus named because of the poplars growing down either side of it. Even before Rosetta Road went through properly, what is now Matai Road was a through road to Raumati Beach North, as we knew it then. One has to remember that the name “Kapiti Coast’’ had not even been thought of in the 30s and 40s.

The Eatwells had their own cows, pig, chooks and a couple of horses. The Eatwell girls would milk the cows each morning, churn the milk for cream, and they made their own butter. I remember going down to help with some of the chores. The cow bales were in the dip alongside the beginning of The Crescent where a house is now. The whole area was quite different then. I seem to remember that the animals grazed where the Raumati South Hall is now. There were relatively few trees in this area in the early days. The Guest House virtually stood alone. Mr Eatwell was constantly busy putting in roads, with the help of his son Jack. The Eatwell family all worked in the guest house, and they all worked hard. The Eatwell girls used to escape to a shed at the end of what is now known as the beach access way, opposite Menin Road. This was in the days when the sand dunes were all along the beach and the tide did not come right up as it does now. The track, as we knew it, was used by many people. It was used to haul boats up and down to the beach. The girls went swimming and entertained their friends far away from the confines of Kawatiri Guest House.

We called Tenniscourt Road Pine Tree Ridge, as it had these trees along the top. At the southern end of the road was a motor camp. At the northern end a lady lived in a caravan and she had an organ. I think it was housed in a shed nearby. We loved hearing her play it – even though it was a bit squeaky!! I remember the little church around the corner being built, but not when.

Mr Bill Peart lived by the beach just north of where Poplar Avenue meets The Esplanade. He was a lone individual. During our holidays in the thirties, I would go and talk to him when he was preparing his wooden boat for going out to fish. The boat had a sail, and he had oars to get him out beyond the breakers. He fished virtually every day. One morning I asked him when he would be going out but he told me he would not be fishing, which made me ask why. He told me that soon after midday there would be a storm. It was a glorious morning so I asked him how he knew this. He said he could read the clouds, and the currents and the breezes. By early afternoon the southerly had come, the sea was rough, and no one would have wanted to be out fishing! He used to catch a variety of fish – the snapper was our favourite. They were very large by today’s standard.

During the war the Americans were at what is now called Queen Elizabeth Park. The Marines were scarcely more than youngsters and many felt homesick. They were often entertained by local people, and we got to know some of them quite well. They were always glad to visit, never came empty handed, and were generally very nice young men. They liked to go into Wellington, and the trains going south, past the camp, would slow down so they could hop on, and the trains going north did the same. Paekakariki Station was some distance for them to walk there and back. They would use landrovers to come to Raumati – a vehicle we had not seen until the Americans brought them here. They didn’t always bother to go via the road, but made their way overland to Raumati South, finishing up at the place where a school is now. Sometimes they even brought petrol with them.

Dad had a Penta outboard motor sent from Sweden around 1942 (during the war) with some hydroelectric equipment. (He was managing director of ASEA Electric (NZ) Ltd and busy putting in hydro power schemes in various parts of the country.) One day when it was reasonably calm, Dad took us over to Kapiti, the Penta worked perfectly. We stopped near Aeroplane Island (as we call it) and were amazed at the huge amount of kelp floating on the surface; we could see fish swimming amongst it. We did not go right over to Kapiti as the roar of the current between the island and us was loud, to say the least. The tide was probably turning. When we got back a man was waiting for Dad, and he tore Dad up for a scrap of paper for having taken his family (there were six of us onboard) out like that with no lifejackets at all!!! 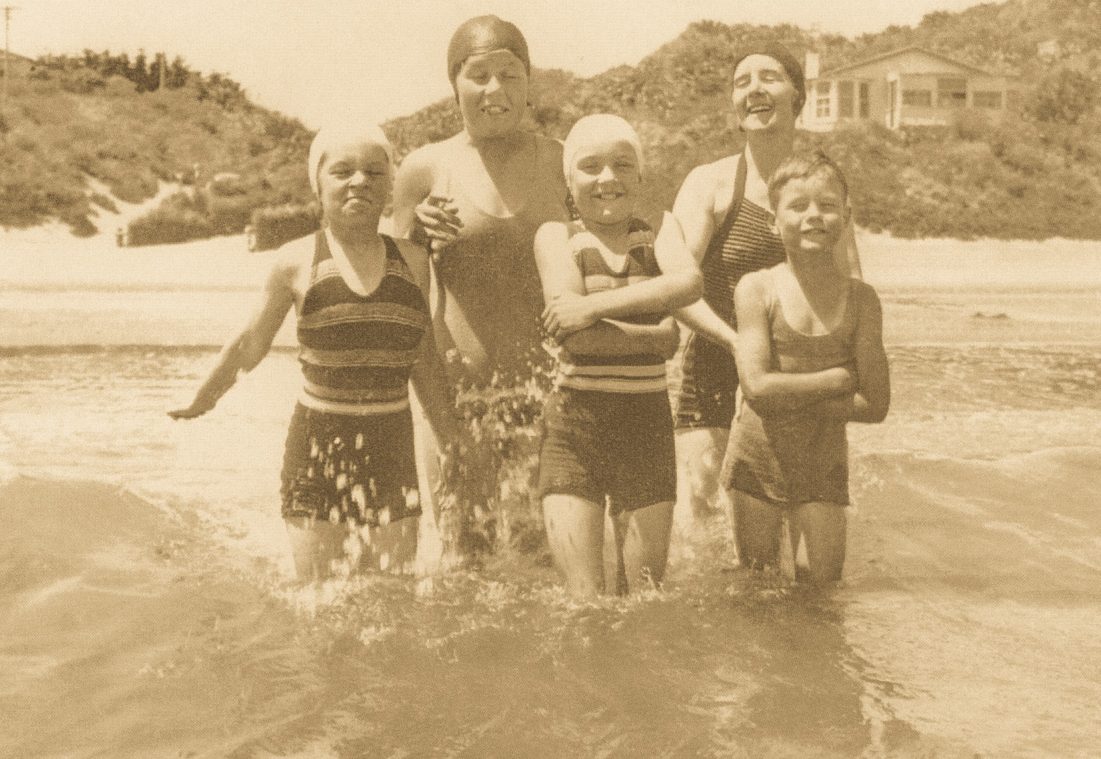 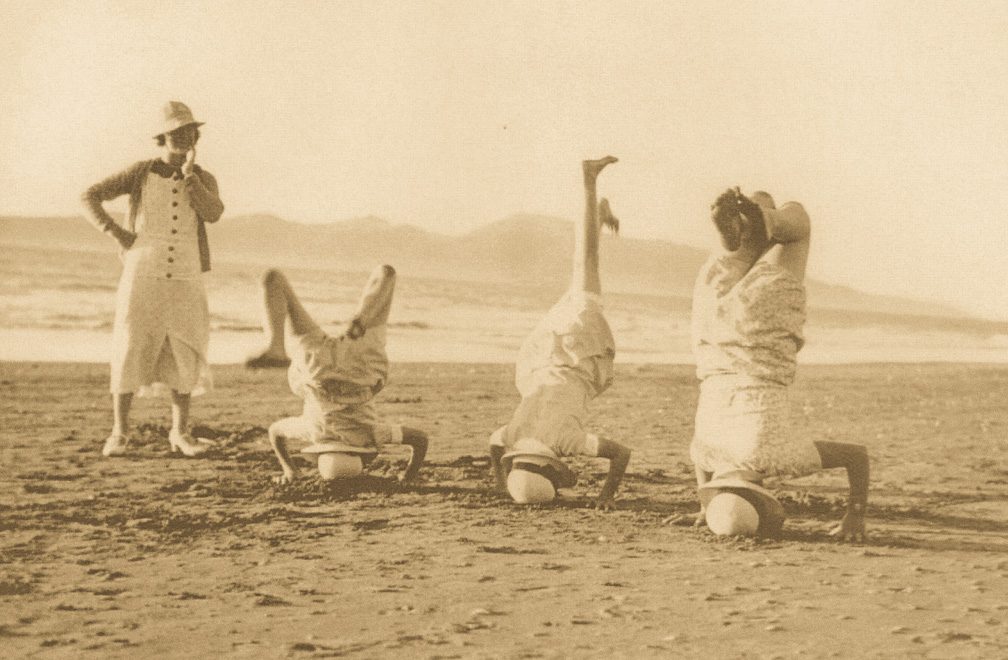 Lamburd girls have fun while mum looks on… Kapiti in background. Probably 1938. 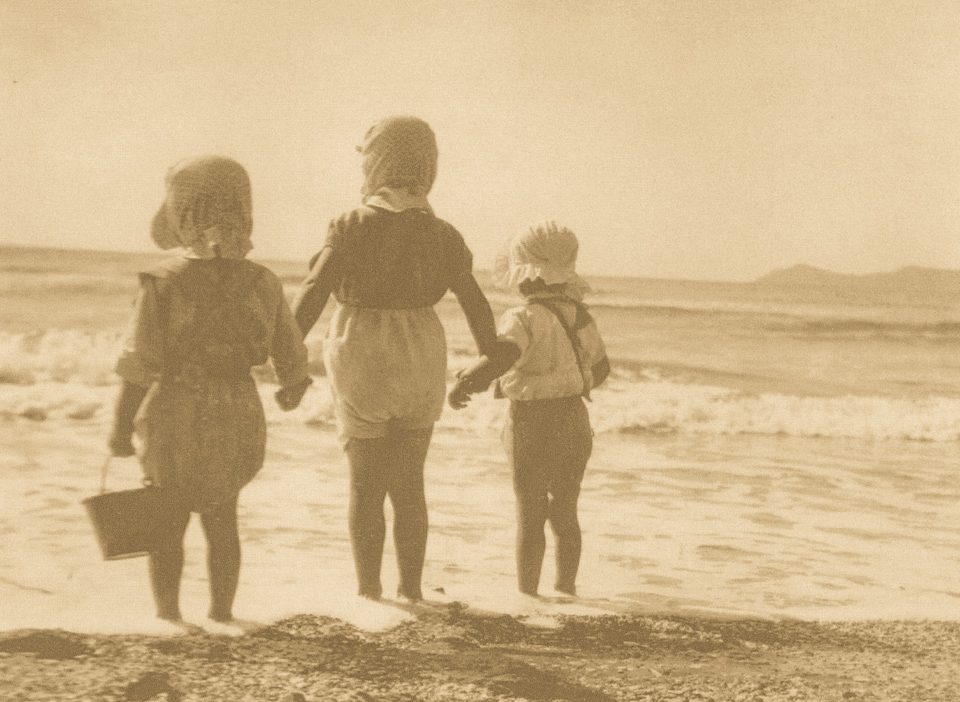