Our family moved from Wellington to Raumati South on 23rd February 1947. My sister Alyson was just 6 weeks old and I was 19 months old. My Dad (Alister, commonly known as Ally) worked for a while on the Hutt County Council, but soon found work at the Paraparaumu airport refuelling the planes. He often told us the story of how he was driving the tanker along the Kapiti Road boundary when a plane came in to land very low, so low they thought they were going to be hit. It was soon after that that the traffic lights were installed on Kapiti Road, which worked when incoming traffic was approaching. After a couple of years he went back to working for the Council, and brought his first truck from Stan Mudgeway. The second-hand Bedford was his pride and joy, and he contracted himself and the truck to the council for many years. To supplement his income he supplied shingle, boulders, cement etc to the general public as time permitted. The family spent many a weekend “helping” him load boulders onto the truck by hand at Otaki.

My first recollection is of the bach we lived in on Rosetta Road. It was owned by my Dad’s parents and had been relocated from Worser Bay. It was very small, just two bedrooms and a kitchen, a very small living area which also included the table and chairs. There was a bathroom of sorts, no toilet of course. That was down a pathway down the bank, a “longdrop,” which was quite usual in those days. There was no hot water, and my Mum had to boil water in kerosene tins on the stove to do the laundry. She tells me the milk was delivered by Harry Shaw’s horse and cart in billycans. She remembers with some horror that I was seen dipping a dead mouse in and out of the neighbour’s milk can. She didn’t know whether to tell them or not, but decided not to in the end, as they were quite well to do and might not have appreciated the joke. I was about three at the time.

I well remember Ivan’s Store on Rosetta Road, which was about 200 yards north of our house. Ray and Nita Ivan had bought the store from Ivan Leach, who I don’t remember, but my Mum tells me Harry won Tatts lottery and bought the store with the winnings. Their son Brian spent a lot of time at our house, as he had not a lot to do and loved playing with my sister and me. Ray and Nita became good friends of my parents. The store sold everything from tea, bacon, needles and cotton, vegetables, etc. to toys and camping equipment. Our first bikes came from the store. They were wonderful chain-driven three wheelers, and we thought we were just made. There was a long driveway beside our house leading to another bach owned by the Sutter family. We used the driveway to ride our bikes on.

I also remember well the Moller family, who lived in Glen Road to start with, then in what I thought was a very grand house on the corner of Glen and Tiromoana Roads. Arnold was a builder, and had built the house himself. My mother was very good friends with Win Moller, and they walked many miles together pushing us kids in prams and pushchairs. I have heard tales of how Marine Parade was unsealed and hard work to push a pram through. I do remember going to fancy dress parties in the church by the shopping centre, and to birthday parties at the Mollers’ house. Winn Moller was a wonderful cook, and parties there were always looked forward to.

There was no kindergarten to go to, so when I turned five in 1950 I started school in the pre-fab classrooms beside the Raumati Beach Community Hall, opposite where the Raumati School is now. I was quite a shy little girl, and the only way my mother could get me on the school bus was for Harry Shaw to stop his milk cart outside our house and give me a ride to the bus stop outside Ivan’s Store. This went on for several months as I recall. I was very lucky that one of my best friends, Susan Pitts, lived opposite Ivan’s Store and got on the bus with me. My teacher, Miss Wittington, did not like the fact that I wrote with my left hand, and insisted I write with my right. I remember having to practise over and over again, also to cut with scissors with my right hand. After a year in the pre-fab classrooms I was sent to Paraparaumu School for a term. I don’t remember why, probably because there were too many children for the buildings. I hated it, as being rather shy I didn’t know many children there and I was still only just six years old.

At the start of the school year in 1952 our class was bused to the old Paekakariki School on the main highway. I spent the whole of my Standard One year there, with a lovely teacher called Mr Pennicut. We called him Mr Petticoat, or course! I really enjoyed my year there, and remember going across the road to the farm and watching sheep being dipped. There were three classrooms in the school building, so Standards One to Three were housed there. Looking back, it was a quaint old building, and I did revisit it in my Form 1 and 2 years for cooking classes.

In March of 1952, my Dad had been part of a group who formed the Paraparaumu and Districts Highland Pipe Band and Caledonian Society. I was taken to watch all the bands march down Tenniscourt Road to the Memorial Hall for the first Highland Ball in September 1952. I thought my mother looked so beautiful in her ball dress, which she had made herself. I was very proud of my Dad playing in the band. He probably didn’t play all that well, as he had only been learning for a few months.

In December of 1952 we moved to our own home, a double garage on a section in a new subdivision, called Alexander Road in Raumati Beach. We had a telephone but no power for about nine months. It was great fun for us kids, but hard work for our parents. We had a gas stove, but the cylinder lasted only about a month and had to be refilled in Wellington. It was a good excuse for a Friday night out in town to get the cylinder refilled. I remember the lupins on either side of us being taller than my Dad was. We cut a track through them to our nearest neighbours four sections away. I don’t know why we didn’t just go up the footpath. The hill behind us backed onto the airport (and still does). It made a great place to sledge down, and many hours were spent playing over there.

Raumati School opened in 1953, and I started my Standard Two year there with Mr Gault as my teacher. In fact, he was my teacher for the next three years. I liked him a lot, which was just as well as I had him for so long. In Form One and Two my teacher was Mr Mellish and I looked after his wife’s class, the primers, even though I was only twelve. One of the other girls and I would read books to them and take them for simple lessons. His wife lost her mother in a freak accident in Wellington – she had been killed when the verandah collapsed on (I think it was) the DIC building. No wonder the poor woman needed some time off work. We thought we were very important and didn’t mind it a bit. The headmaster was Mr AV Gilbert, of whom we were all in awe. Those were the days of corporal punishment, so if you had to see Mr Gilbert you were invariably in a lot of trouble. As it was a new school, naturally most of us were very proud of it. I remember quite a few times having to write out certain phrases so they could be matched with writing scratched into the doors in the toilet block. Someone had done it, but wouldn’t own up. I was scared someone would think it was me, and I would get the strap. Luckily the culprit was eventually caught, and it wasn’t me. Another time a whole lot of us were caught running over some grass, which we had been told not to do. All the boys got “six of the best” and us girls were kept in after school to do lines. I remember Dad coming down to the school to complain as none of the parents had been told their children were being kept in and were naturally worried as to where they were. 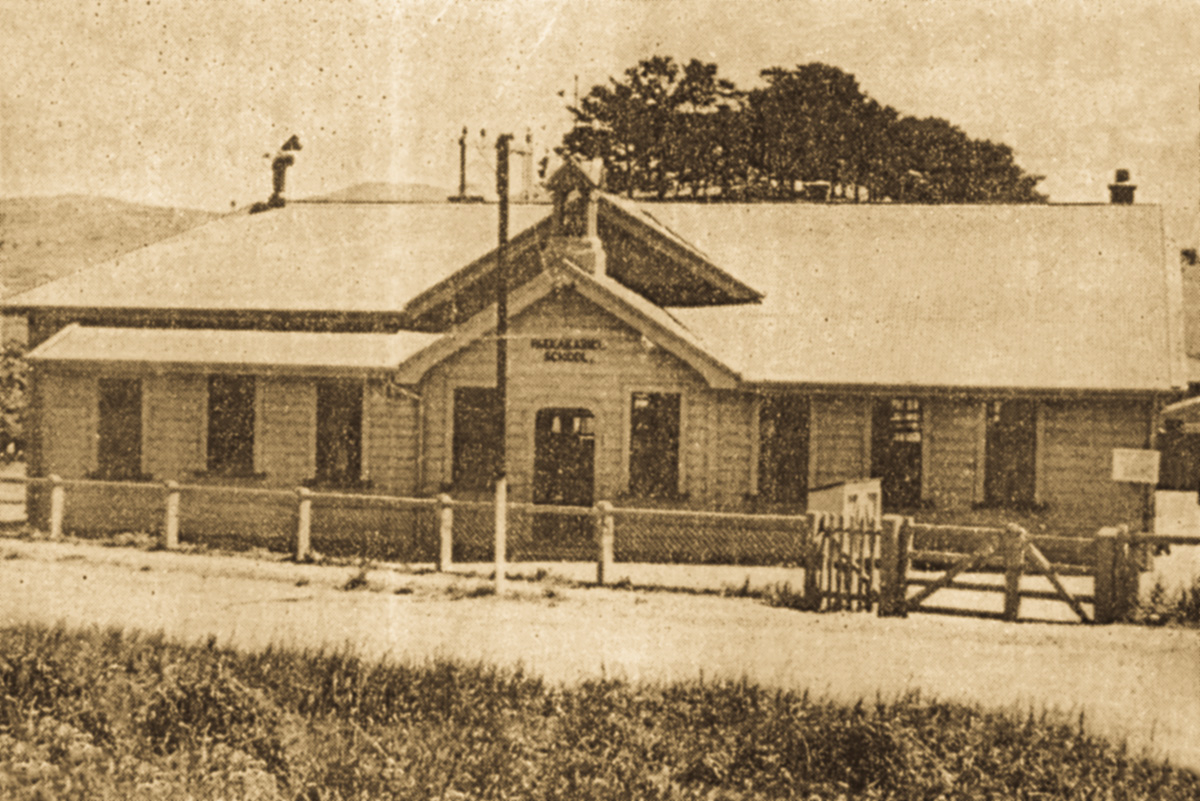 Celebrating the centenary of the Old Paekakariki School on the Main Road in Paekakariki. The school was in use until 1945. Parents felt the site between the road and the double rail tracks was far too dangerous, more so with increased traffic due to the building of Camp McKay down the road. They protested and threatened to withdraw all the children. Their protest worked, and in 1944 children began the work of clearing the lupin for the new Paekakariki School at its present site on Wellington Road. 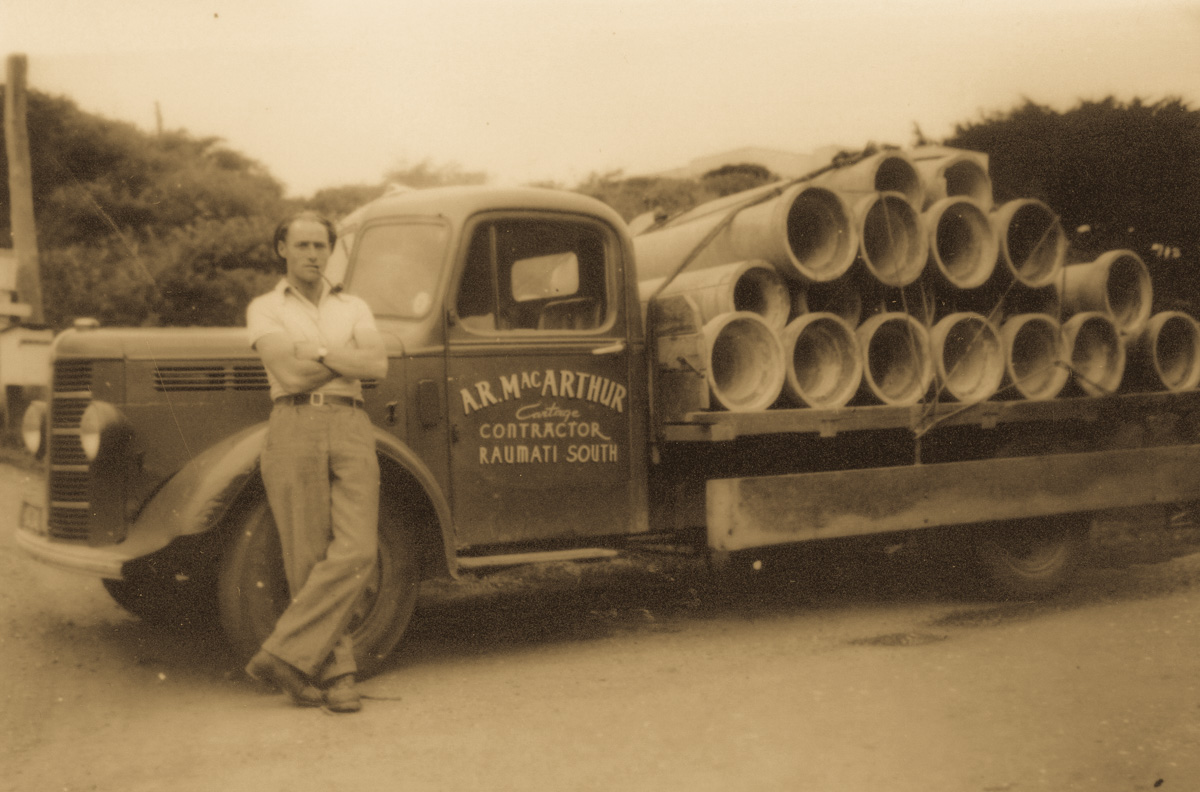 Alistair (Ally) MacArthur poses next to his cartage truck, a second-hand Bedford. Ally contracted himself to the Council for many years. Contributed by Cheryl Brooks. 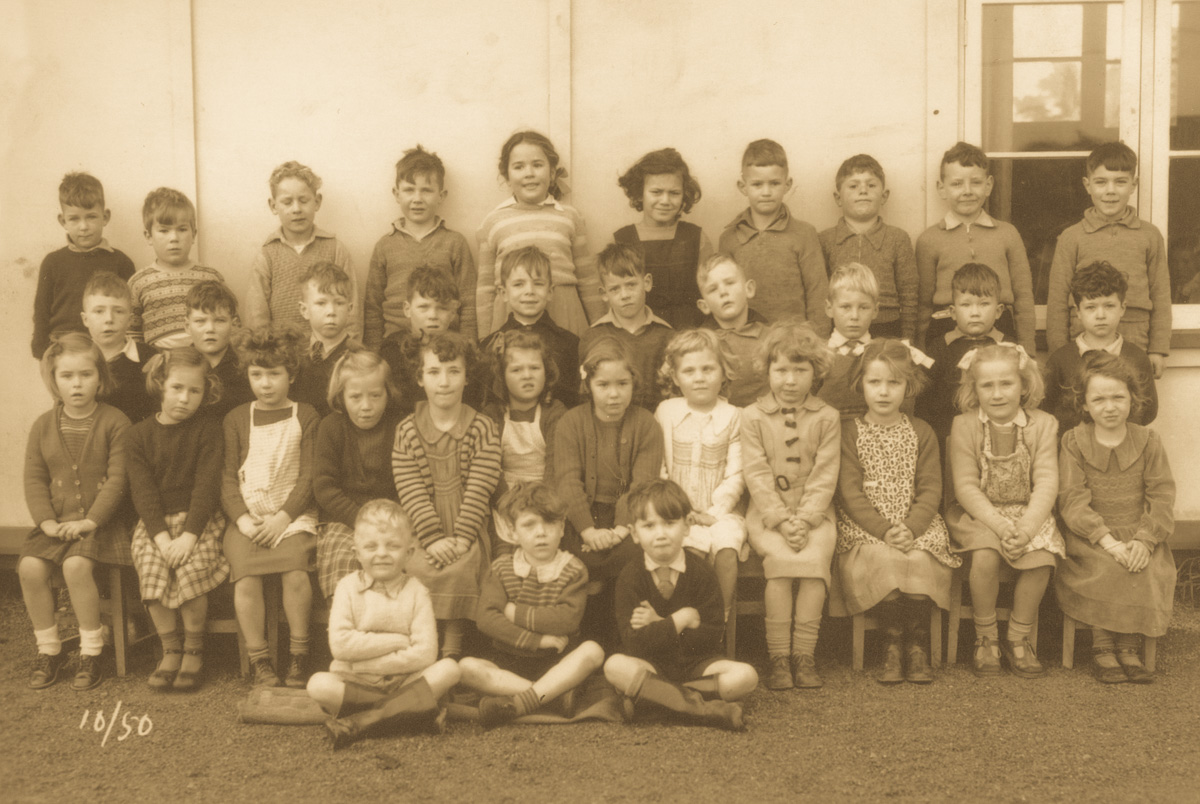 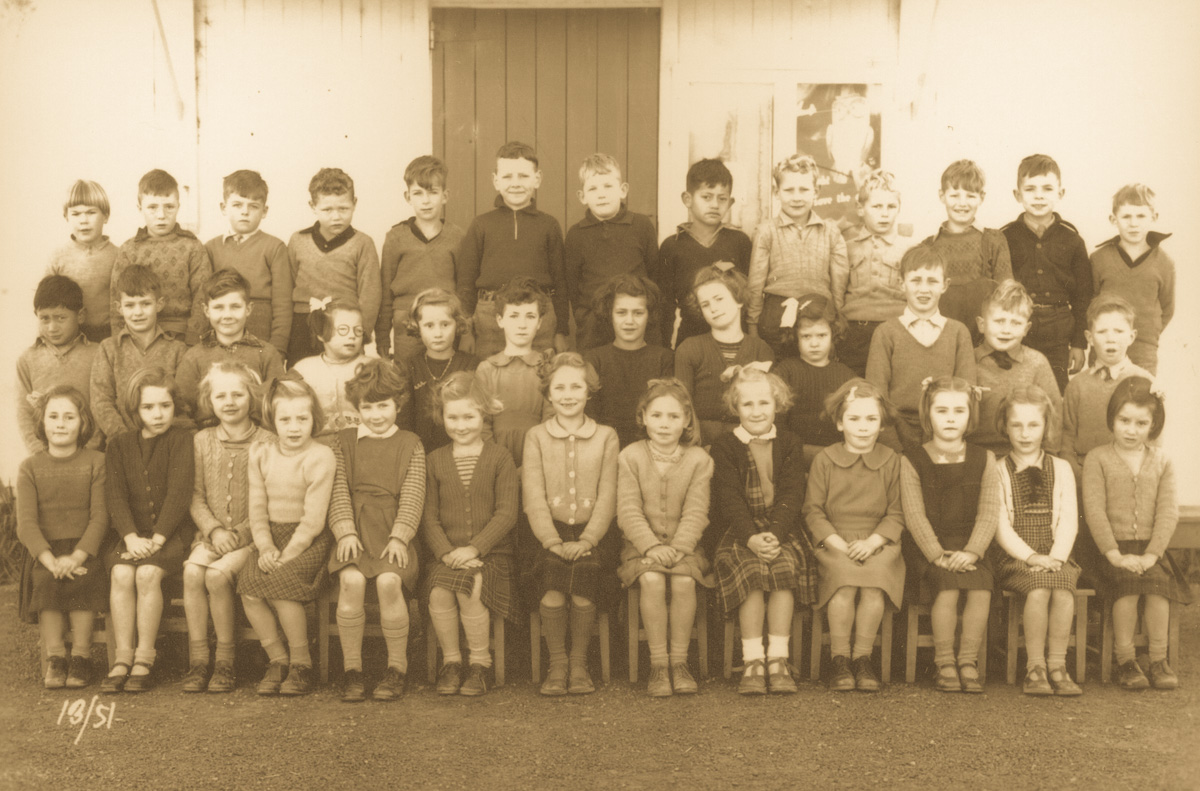 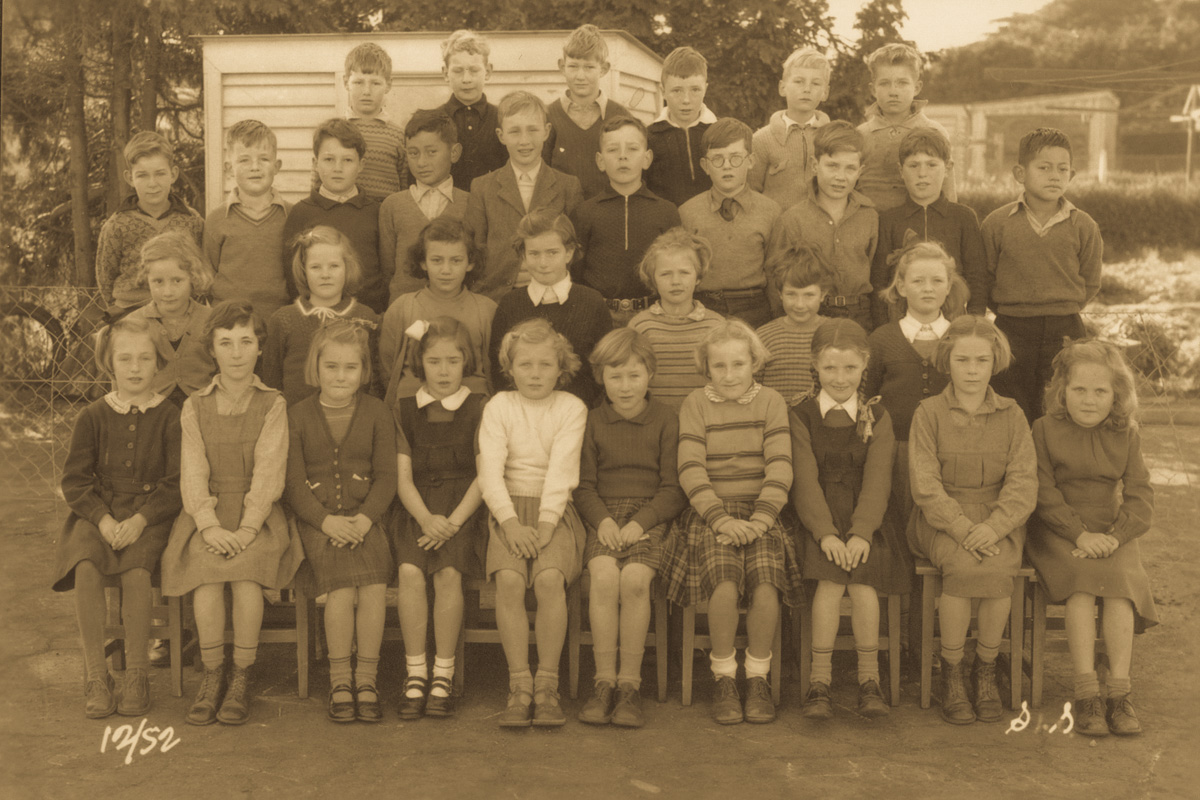 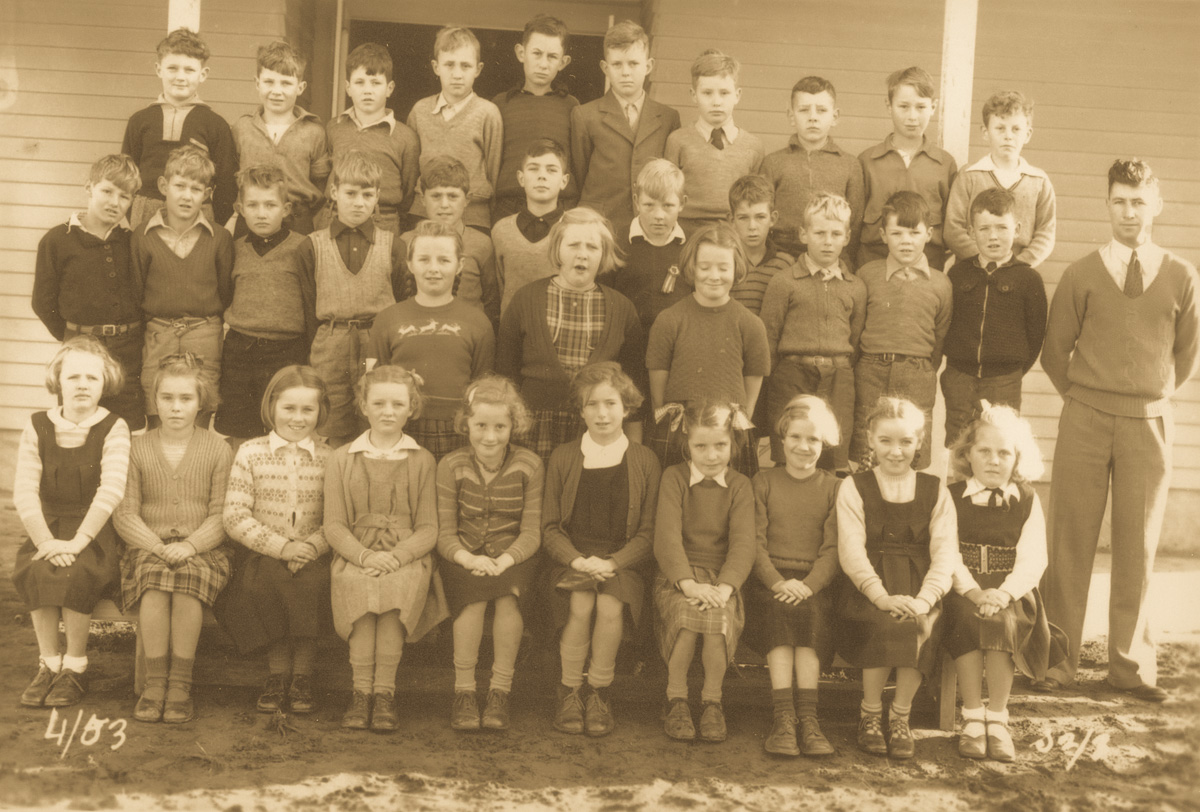 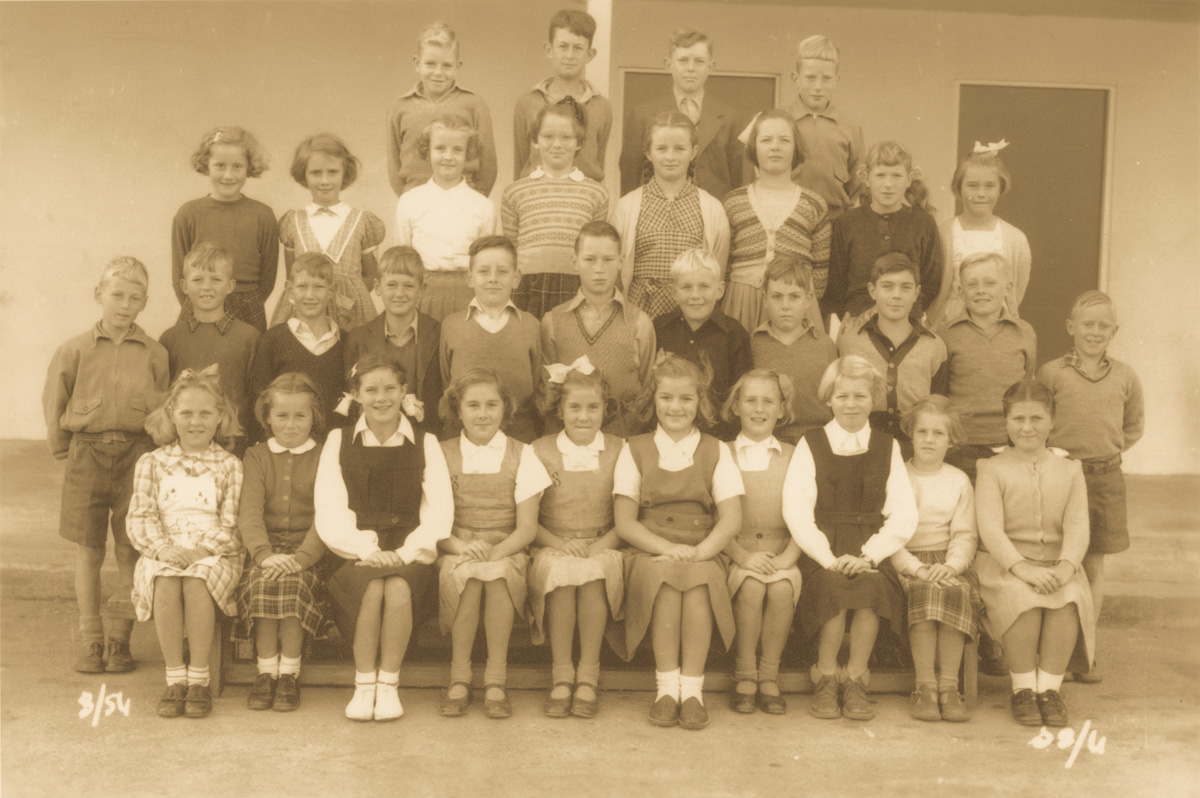 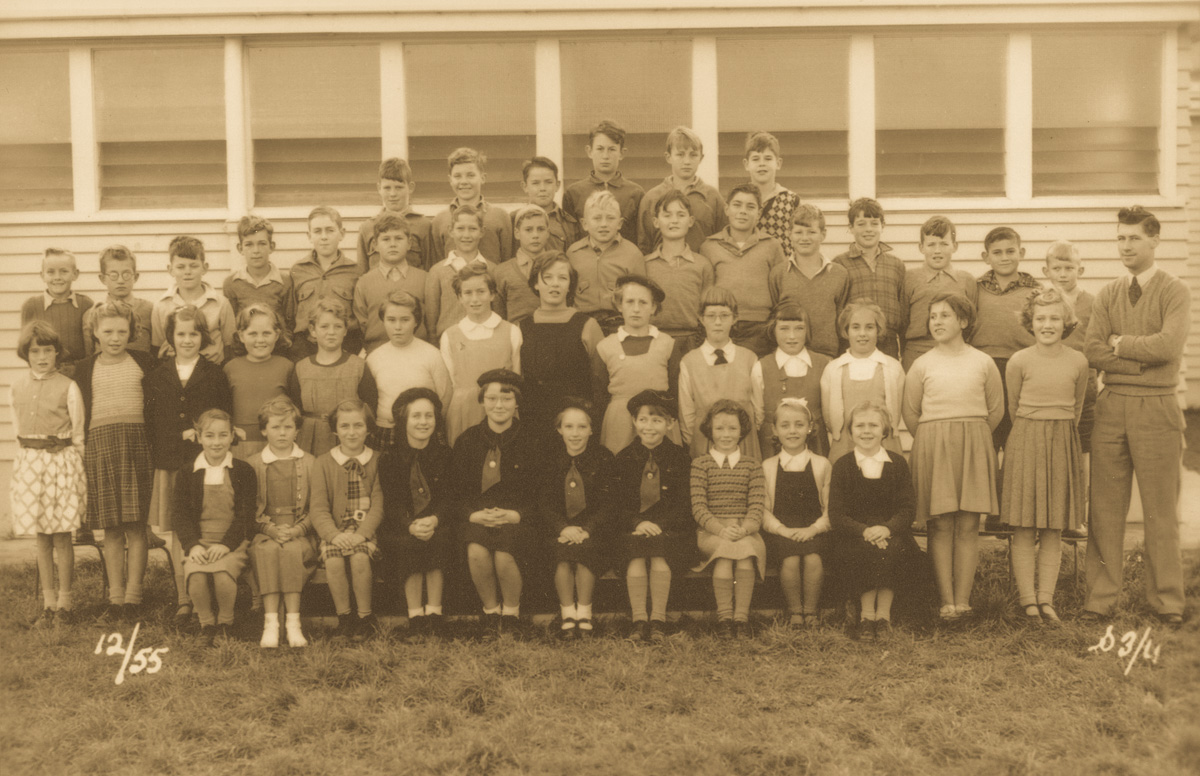 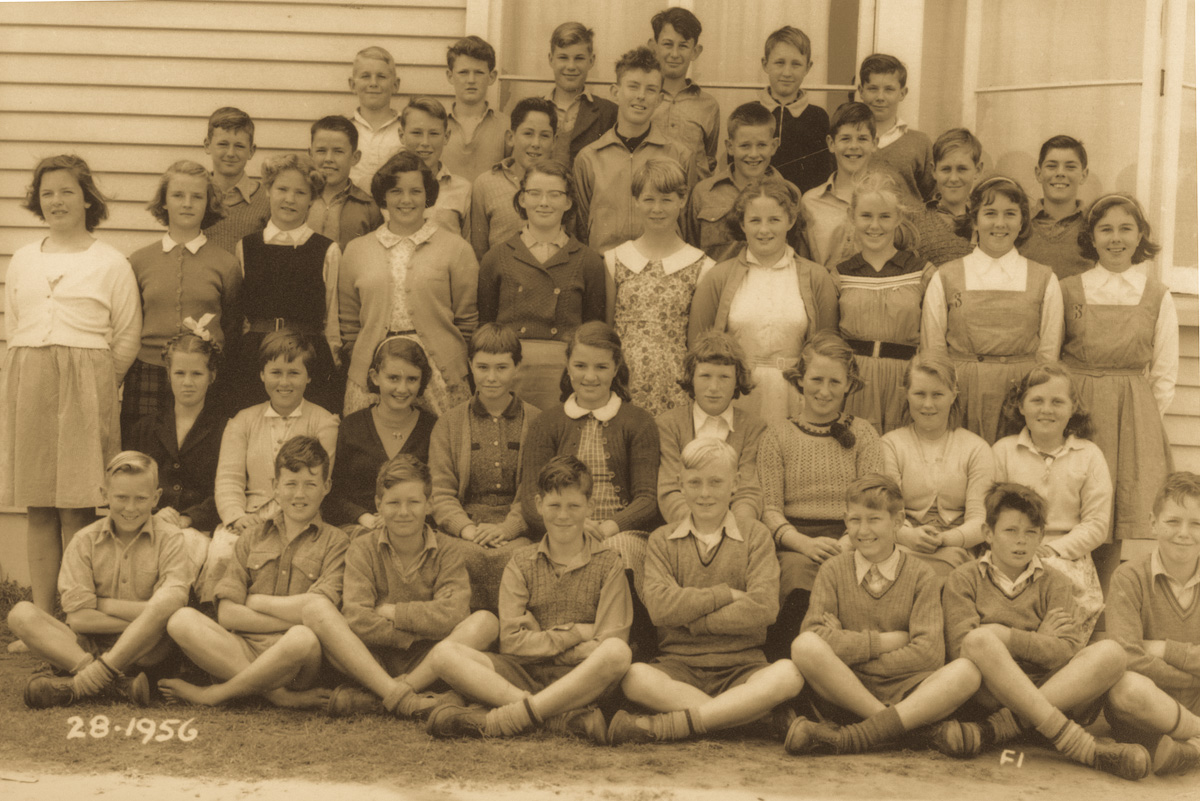 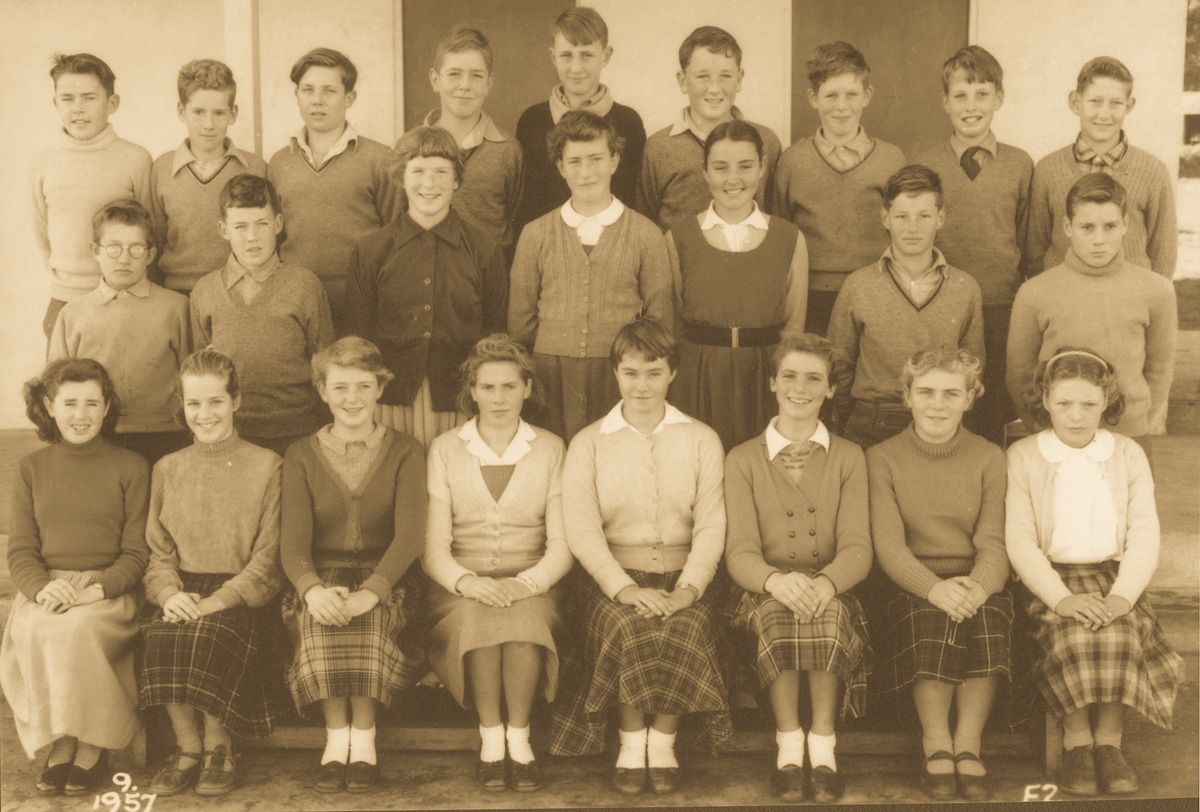 ← The First Kindy A School of Our Own →