A Man of the Land

Land belongs to no man but you do a great service to your country to leave it in better condition than you found it.

I served my country in WW2 in Monte Casino. When I returned I never drew a farm, so instead went to the Wairarapa Training Farm from 1946 until 1954. Then I got the position at Whareroa. During the war I was amazed at the cattle breeds in Italy and Europe and back here I was the first to import and breed English South Devon cattle, Simmental from Austria and Germany, and breeds from Italy, France and Switzerland. Many of the first animals bred from these programmes were bought by the Australians for their stocks.

I took the Whareroa Dairy Farm over in 1955, and retired from it in 1984. I was the longest employee ever for the Lands and Surveys Department. It was a very undeveloped 80 acres of bracken and root, made difficult because it often caught fire from people throwing cigarette butts out of cars. It was quite impossible for the peat to actually be on fire because of the amount of water underneath the paddocks. I was told that a man wasn’t born that could farm that piece of land. So I changed the tune and thought it was possible.

I burnt the whole lot in 1935 from Poplar Ave to Lynches Crossing. After that we oversowed by air, 1½ tons per acre of copperised serpentine, as I realised it was copper deficient. We didn’t get a strike, mainly because of the dryness, so we worked a roller machine through it all and sowed it all by hand. It took me two weeks of walking back and forth between milking. It was successful and I increased the herd from 87 milkers to over 200. There were no more fires. But I remember after the last of the fires going to the Paraparaumu RSA and a fire officer there yelled out, “Who is the biggest arsonist in Paraparaumu?” I answered I wasn’t sure, but I was the second biggest. They couldn’t do that much when there was a fire – there just wasn’t the pumpable water supply available.

All I had was a 200ft-deep bore pump. The water caused huge problems burning our delicate baby’s skin, so we got a rainwater supply for house and a tank. The big problem with the bore and pump was that every four years we would have to lift it and replace the casing, it was completely rusted out with the high mineral and iron content on the water table. You can still see the iron making the Whareroa Stream red. I also connected up to the water supply from near the train ways off the hill and ran nearly 3kms of pipeline, which supplied the whole farm. There was always one thing I would maintain with that farm, we had the terrific spring and then the dry hot northerlies of summer dried everything out. So it was how I farmed the swamp.

The Paekakariki water supply has its problems to this day and I can never understand why the Council has never tapped into the water supply held in the dam above Whareroa Farm. It holds many thousands of cubic metres of spring-fed water with enough fall to flow it straight into the town. I have mentioned it to Council on many occasions. Even now it is piped down McKay Road down to the beach, inside QE II Park.

There were two feeds for the water ways to the sea, the Whareroa Stream and one running from Lynches Crossing about where the closed off driveway is now off SH1. The Maori were able to take their canoes from Paekakariki to Waikanae through the water ways tucked underneath the hills. I found the remnants of a Maori canoe, on the surface about halfway between that closed off driveway and Poplar Avenue. It disintegrated when we touched it. About 250 yards south of the homestead site I dug up three skeletons. Sadly they were just the chest walls, spines and heads, clearly the remains of a human hangi. Police Sergeant Hector Pine was notified. Professor Fowler from the Dominion Museum suggested that they were the bodies of young slaves at around 21 years old, they were taken into the care of the museum who also took care of a beautiful D’Urville Island obsidian adze dug up on the property. During the building of the railway adjacent to the intersection of Poplar Ave workers came across a forty foot long stone jetty for the canoes. While clearing the vines off the karaka trees ready for felling, many child-sized skulls and skeletons came down on top of the workers.

We lived in the old farmhouse and lowered the 12 ft stud while there. I was very disappointed that the house we lived in was advertised for sale or demolition two years ago. It was advertised as being built in 1920. Under the kitchen linoleum we discovered news-
papers dated 1844, meaning it was twenty years older than Emerald Glen. It was a bit more towards the beach than the buildings now. There was another house on the farm, about halfway between Matai Road and SH1, off Poplar Avenue. It was demolished. The house at the north end of the farm up on the ridge was owned by a Mr Phillips, and he sold it to Mr McKenzie who subdivided that area. It was later owned by Mr Kraayvanger.

The Rainbow Camp was built after the Indonesian conflict. The East Indian company moved all the Dutch nationals out of Indonesia because the Japanese were coming. From about 1951–1956 families from Wellington stayed and had holidays in the accommodation and in caravans. My daughter sneaked to the shop to buy chewing gum on her parents’ account. But we had no account and we found her out. My late wife’s name is Eunice, we have one daughter Andrea and our son Paul.

Roughly 1952, the whole area from Poplar Avenue to Paekakariki and from McKay’s Crossing up into the hilly Whareroa block was taken by the crown. It was bought off the then owners to farm to use the profits to pay for the upkeep of the park. At one time there were Chinese market gardens around by McKay’s Crossing, and before that the express train was known to stop so that the Maori from Whareroa Pa could come aboard to sell their vegetables to the passengers.

I had the army out an awful lot because of the mortars on the undeveloped land. The Americans beat a hasty retreat and basically dumped the ammunition in holes. Much of the land I can never declare safe and we banned people from some areas. The sand-hills motorway route was going through the old cowshed, so we built a new one. When the contractor lifted the concrete foundation pad, I spied four mortars just lying there. So I just asked him if he could gently lower it back and told him why. Well he packed up and left straight away and he never came back after that day. In one furrow I turned up three mortars in one row, but there was no use in them bringing in mine detectors because even now they would just continuously go off. The problem in those sandhills was huge. The armour-piercing shells needed vacuum to detonate. Vacuum was ok between the outer layers of a German tank, but there was none when they were fired into sand, so there they just stay undetonated forever.

In 1984 I retired and went to farm on Mana Island to raise beef cattle. It made me laugh that they had built two houses over there, each one with a garage, but there were never any cars over there. The Ag Dept did a great job with the pasture, some of the best I have ever seen. The artificial insemination programme there included one of the most impressive surgical labs in the country. Duncan McIntyre was instrumental in helping start the New Zealand breeding programmes.

In all the years we had the farm I never ever let my family milk a cow. I had seen too much of that in my early years, and my children’s education was far too important. My wife and I had school groups every week over the years from schools all over the Wellington region, we got a lot of joy from showing the children around. 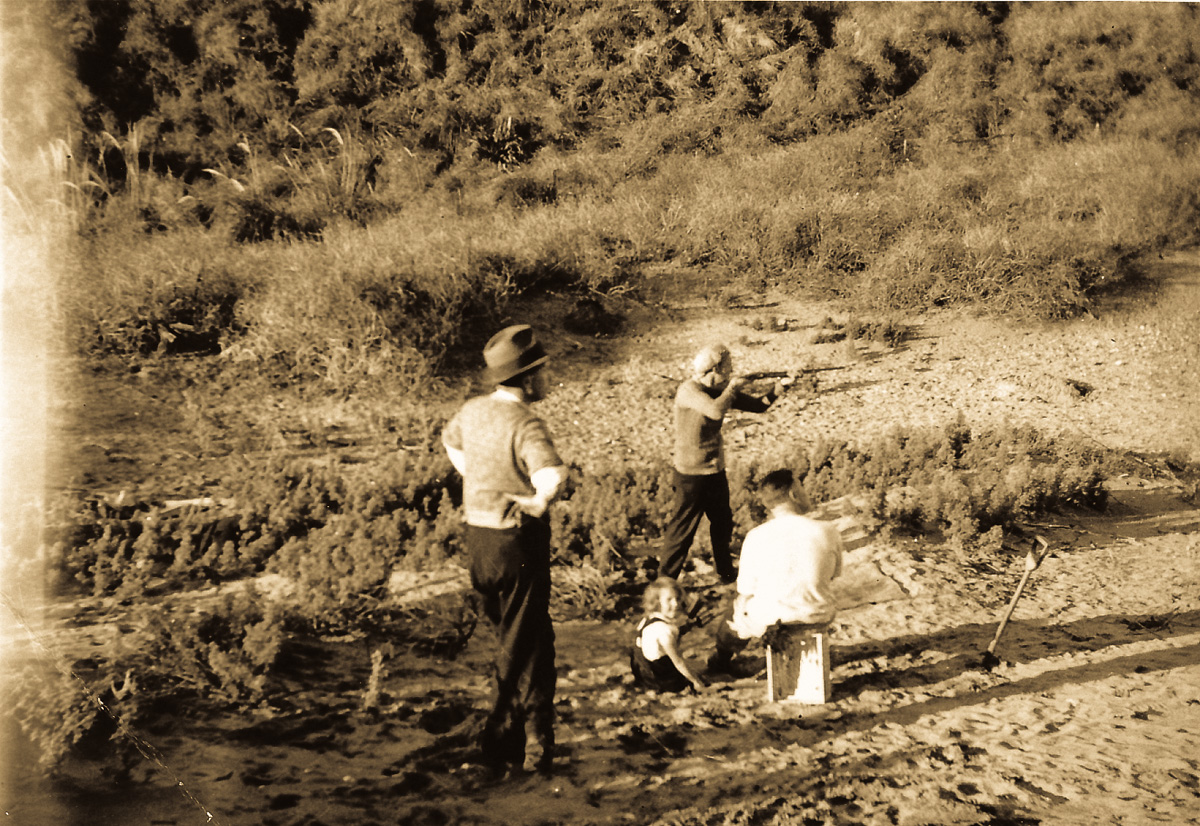 ← Meet the Neighbours The Red House on the Hill →