A Garden by the Sea

Some 50 years ago my wife and I decided to move to Paraparaumu, or rather Raumati. We had two little children, and were attracted by the long stretch of sandy beach. We purchased an acre against the sea; it was covered with high flax and toitoi and was not very expensive. After much hard work we cleared enough space to build a small crib or bach and there we settled in. There was of course no electric light, no telephone, no water except a 200-gallon tank, and there were no roads. For groceries we had to walk about two miles and for meat we walked five miles to a farm where a farmer cut up one beast at a time. So there we were. It was delightful: the children had a pet and we had a succession of very fine days, wind of course, and were in the water most days. As we have gone on the water has got colder. So the children grew up and now when they come back, they don’t swim very much at all.

The place was empty. I think we had the first permanent habitation here and had the whole beach to ourselves except for the weekends when people would come out on buses and trains and for a few hours the beach was crowded. There was an enormous amount of fish. Wellingtonians came out with nets and went away with full boxes of fish. Fish got less over time, and they dropped off markedly after the Americans visited McKays Crossing. Suppose it was the amount of explosives let off at sea. It was a very pleasant sight to see schools of tame porpoises off the beach every morning, very curious, they would nudge your boat on the water. There were some terrible things out there too: blind and conger eels drifted in from Kapiti, sharks (but not a great many inshore), sea lions and walruses. One day a young walrus got washed up against our fence. Wounded, we couldn’t feed it or get near it. It stayed for three days before slumping back out to sea. We had seals too come in and rest for a few days and take off again.

On land we had ducks, quails, swamp hens and wax eyes. Bush robins, parakeets and pigeons came from Kapiti, rabbits and even a buck hare that nibbled my wife’s garden – very annoying. The quail left quite quickly once dogs arrived in the area. We excavated pure sand and brought in earth and clay and had a very good vegetable garden. There were always too many beans and cabbages and we had to give them away. We planted apricots and peaches in the soil. After two years of bumper crops the trees withered and had to be removed. Cherries, plums, apples, grapefruit and lemons survived, also one orange tree and quince which are still fruiting.

We’ve retired now out here. It’s secluded, quiet, and we have altered the original bach fourteen times. We now have 1000 gallons of water. The council are now threatening to put another water supply in, the rates have gone up and we have had a council road put in. But we paid for it and gave them the land for it, 40 ft of carriage way with two footpaths. Rates have risen from 2 pounds 11 pence since buying the place in Rosetta Road. We have been around the world but it suits us just fine here.

My wife and I are not as well as we used to be when we pulled our boats out to Kapiti to fish. We will sit here until we go somewhere else, watching the sea and watching the birds.

Contributed by Dora Riepen
from a taped interview (1950s era) 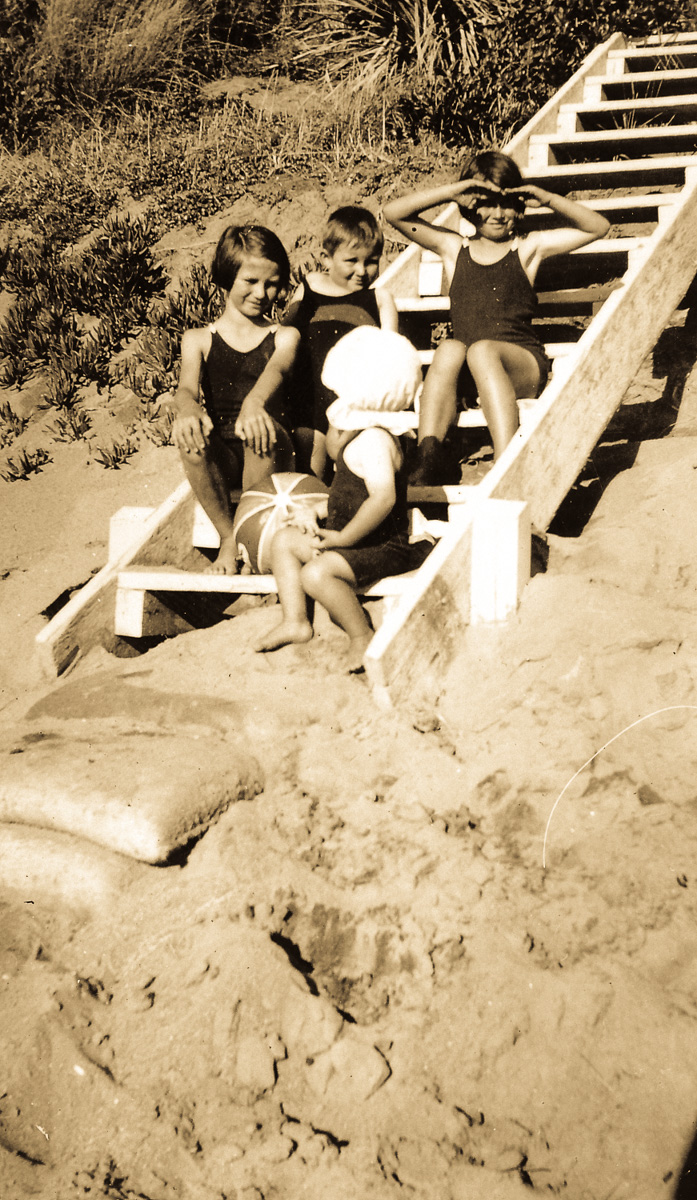 ← Our Rural Land Meet the Neighbours →